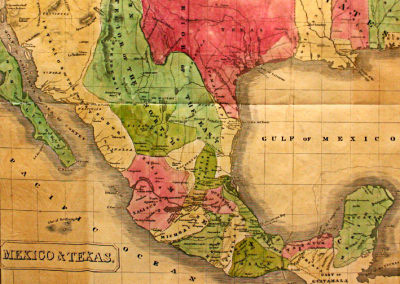 This exhibit is downstairs in the Museum of the Big Bend.

The Republic of Texas declared its independence from Mexico on March 2, 1836, and existed as nation until it was formally annexed by the United States on February 19, 1846.

Mexico never recognized the Republic of Texas, considering it to be a rebellious province during its entire existence – this despite the fact that Mexican President General Antonio Lopez de Santa Anna had recognized the independence of Texas following his defeat and capture at the Battle of San Jacinto on April 21, 1836. The Mexican Congress considered that Santa Anna’s signature on the Treaty of Velasco had been obtained under duress, and there were intermittent conflicts between Mexico and Texas over the next decade.

The borders of the Republic of Texas were disputed throughout its existence, as reflected in these maps. These maps from the Yana and Marty Davis Map Collection, all original from the Republic of Texas period, also reflect how little scientific cartography had been carried out in the region up to the time Texas was annexed by the United States.

The annexation of Texas in 1846 triggered the Mexican American War of 1846-1848. The US victory in that war greatly changed the political delineations in North America but also led to some of the first truly accurate maps of Texas.