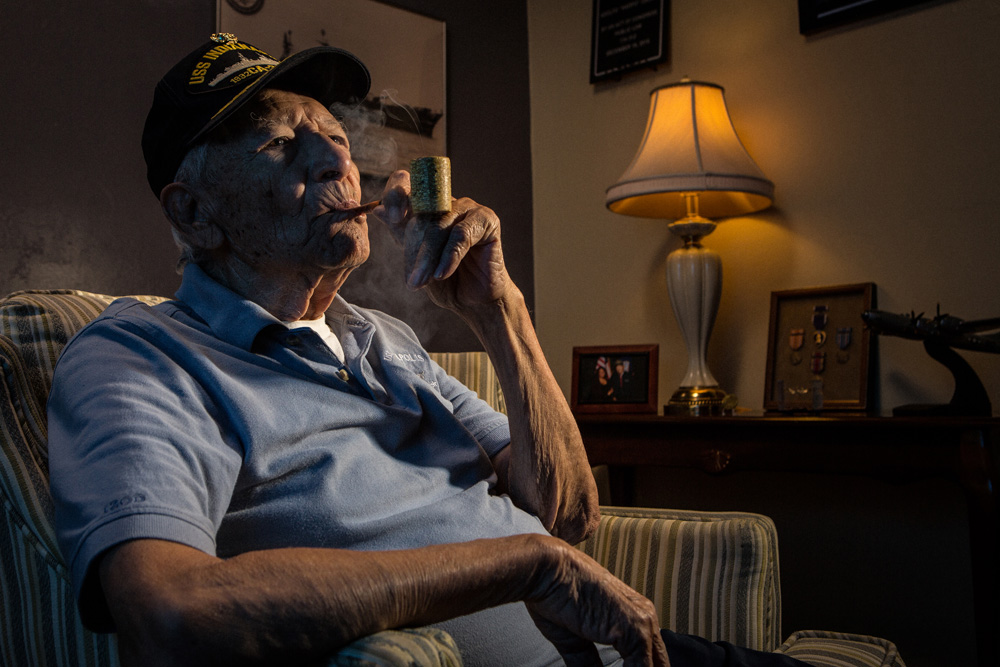 Adolfo Celaya was sixteen years old when a Navy recruitment sign caught his eye at the local post office. “Join the Navy, See the World.” Like other sailors, he soon realized that he wouldn’t see the world in the way he imagined. The choppy sea and raging war were the only things on his Naval itinerary.

That year all that Adolfo wanted for his seventeenth birthday was for his father to sign his enlistment paper. “My dad didn’t want to sign and so I asked if he would for my birthday, if he’d give me that present.” His father relented and Adolfo was inducted into the U.S. Navy in August 1944.

He took his basic training in San Diego where he went to fireman training school. He began to experience prejudice in the ranks for being Mexican-American. All throughout his time in the Navy he never fully escaped from discrimination. Adolfo and fellow Hispanic soldiers were given the lowest tasks.

“Any jobs that were not taken by a white person would be given down to anybody that had Hispanic blood. You couldn’t do anything about it. If you tried, it got worse.”

Adolfo had never set foot on a ship until he was assigned to the USS Indianapolis. It was a foggy night when the 1200-man crew was taken to the ship off the coast of San Francisco. A cloud of darkness veiled the ship as they were led to their hammocks. It wasn’t until morning that Adolfo saw the ship for the first time.

“I got up, went outside, and looked at that thing. My God, I wanted to get the hell out of there right away. It was big.”

They set sail shortly after Christmas, heading to Pearl Harbor before continuing on to their first combat mission on the island of Iwo Jima. The USS Indianapolis was five miles out as they bombarded the island before U.S. Marines landed. Adolfo saw kamikaze planes burn up in flames and heard relentless explosions everywhere he turned.

Adolfo watched as transports of Marines arrived on landing barges right beside his ship as they prepared to storm the island. He was eyewitness to an iconic moment in history—the first flag raising on Iwo Jima. A comrade pulled him over to watch the event unfold through his binoculars. At seventeen years old and already jaded by war, he threw the binoculars back at his crew mate. “Ah, big deal.”

After twenty-five days at Iwo Jima, the USS Indianapolis was sent to Okinawa where they assisted with beach defense. The USS Indianapolis is credited with shooting down six Japanese fighter planes. But things were about to take a turn for the worse. Adolfo was walking towards the front of the ship when he saw a ​kamikaze​ plane coming in at a fast pace. It dropped a bomb on the ship before crashing. The attack ​resulted in several American casualties​.

The USS Indianapolis was sent back to California for repairs, they were chosen for a secret mission which Adolfo didn’t learn about until after the war. They were selected to transport the components of the Little Boy atomic bomb to the island of Tinian from which the B-29 Enola Gay would make its mission to Hiroshima. Adolfo saw boxes onboard that were guarded by Marines, but he could only guess their contents. “I joked it was whiskey for the general or something.”

The USS Indianapolis set a record speed as they made their way, unescorted, to Tinian where they delivered the mysterious boxes. After unloading their cargo, they made their way to Guam where they were ordered to rendezvous with other ships in the Leyte Gulf. Without submarine detection gear, they requested to be accompanied by a destroyer. Their request was denied, and they had to make the journey again, unescorted.

Disaster struck on July 30th, 1945. A Japanese submarine fired two torpedoes at the USS Indianapolis. Before the first torpedo struck, Adolfo was sleeping below deck when his crew chief told him to come upstairs on account of the unbearable heat that night. The top deck of the ship was crowded with sailors trying to sleep. Adolfo managed to find a little space in the middle and fell asleep with his blanket draped over him despite the heat. Having grown up always sleeping with a blanket because of pesky mosquitoes, the habit ended up saving his life.

When the first torpedo struck the front of the ship, fire from the explosion burst through the middle of the deck where Adolfo was sleeping. It completely disintegrated his blanket. He could only open his eyes to small slits as he tried to run from the fire. His eyebrows and eyelashes were gone, his hair singed. “If I hadn’t had my blanket on, I would have been burned up.”

He couldn’t see, could only hear the mayhem happening around him. He ran to the back of the ship, a fiery blur in his eyes as the second torpedo hit the ammunition dump. The explosion was deafening, and he felt the ship rock and begin to sink. Adolfo didn’t have his life jacket and was trying to go downstairs to retrieve it from his locker when a friend stopped him.

“Stay with me and you can stay afloat on my jacket,” his friend said.

His friend jumped off the side of the ship, about two stories high, while Adolfo followed next. Sailors were shouting in panic as the ship went down. Twelve minutes passed before it was swallowed by the sea. Adolfo hit something on his jump down and was sick with worry that he landed on his friend. He swam away from the ship as quickly as he could, managing to open his eyes just enough to catch the end of the ship go down into murky water. Twelve minutes prior he was sleeping comfortably. Now he was in the ocean and his ship was gone.

It was pitch black. The moon came in and out of the clouds, giving light for short periods of time before masking the ocean in complete darkness. Adolfo was a good swimmer, but this was different from the canals of his childhood. “The ocean was a lot tougher than I was.” He managed to get ahold of the side of a life raft to stay afloat.

Time moved slowly during that first day in ocean. “I thought we’d be picked up within hours or within a day. I never thought we’d be there five days.” The bickering, fighting sailors began to agree on one thing—nobody knew they were stranded out at sea. “After the third day I started thinking the same as the other guys. I guess they’re not going to pick us up.”

The sun beat down on them in the day and the ocean was bitterly cold at night. Adolfo’s hope of rescue began to fade. There was nothing to drink and sleep was dangerous. While other sailors had friends to help them keep afloat while they slept, Adolfo was on his own. He tied his t-shirt around a rope on the raft, securing himself to the side and managed to catch small spurts of sleep.

Because Adolfo could easily swim around without the weight of a life jacket, he brought sailors to the edge of the raft who were drifting away from the group. By the second day, he was exhausted and couldn’t save the sailors anymore.

Some gave up and let themselves drift off. Sharks lurked under the water, and he heard the screams of sailors as they were attacked from beneath the surface. If the weather was clear, he could see the sharks stalking their prey along the surface. Thirsty sailors couldn’t stand it anymore and began drinking the salt water. They began hallucinating, and many were lost to the sea. Before Adolfo left for the war, his mother gave him a medal of Saint James that gave him the courage to keep going. For days he held on and tried to keep his crew chief alive.

“I think he kept drinking salt water. If I could have gotten him onto the raft, I could have kept him alive, but I asked the guys up on the raft and they pushed me under water.”

On the third night, Adolfo was sure he was hallucinating when he heard Spanish voices in the distance. The next morning, he swam around the large group of sailors and there was his friend whom he thought he had killed when he jumped from the ship. Adolfo was relieved to see him, but soon had to swim back to his crew chief to make sure he was all right. When he got back to the raft, Adolfo discovered that he wasn’t there anymore. His chief had untied himself and was waving goodbye as the waves took him away.

On the fourth day, they were discovered by ​American pilot Lieutenant Wilbur “Chuck” Gwinn. Somebody yelled that they saw a plane, and when it circled over their area and tipped its wings, Adolfo breathed with relief, knowing they had been discovered. “Everybody was in bad shape. I don’t think many could go another few days.” Out of the 1200-man crew, only 317 survived.

Lieutenant Gwinn signaled an alert to the nearest American base on Peleliu. A seaplane rescued some of the survivors that day. Adolfo had to wait until the following day when he was saved by the crew of the USS Bassett. The USS Bassett took the survivors to a base hospital in Guam where Adolfo began to recover. After a month they were sent home to the states. On the journey home, Adolfo heard that the bomb had been dropped on Hiroshima. At that time, he still had no idea that the USS Indianapolis transported the bomb components.

Another trial soon began for Adolfo on the trip home aboard an aircraft carrier. For three days in a row he was picked for work detail on the ship, the same old prejudice against him ever present. He was still recovering and told the Lieutenant that he thought it was time he picked somebody else from the crew. “We have another 300 survivors here that could probably do a little bit.”

He was sentenced to two days of solitary confinement with only bread and water to eat and drink, for insubordination. When the ship reached San Diego, he spent another five days in confinement locked inside a small cubby hole just a month and half after being rescued from the ocean. He was then taken to Long Beach Naval hospital and was discharged from the Navy. “When I was discharged, they gave me fifty percent disability and told me I could not join the Navy again. I said, ‘Why that’s a blessing!’”

Upon returning home Adolfo, at age eighteen, suffered from what we now know as post-traumatic stress. He stills suffers from nightmares from those long days lost at sea. It took nearly thirty years before Adolfo could share his story. Once he started, it was a healing process for him. “I’m just glad I’m alive. I’m glad I’m here.” Adolfo’s hope is that young Americans will learn and care about the history of WWII and have respect for those young, tough boys who won the war.