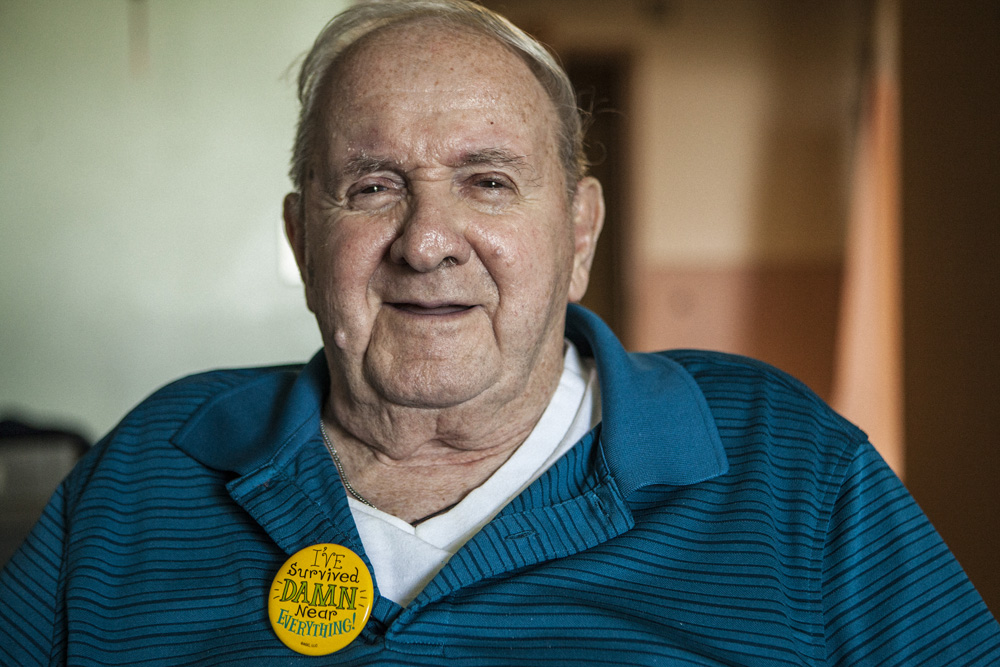 My grandfather was one of the more than 16,000,000 Americans who served during WWII.

He was born in Auburn, NY to Italian immigrants. His father passed away when he was eleven years old, leaving him and his brother to fill the void. He told stories to me about walking along the railroad tracks, in search of pieces of coal that had fallen off the trains, in order to help keep their home heated during the brutal winters common to upstate New York. He also worked as a pin setter in the local bowling alley to bring home extra money.

Growing up during the Great Depression was no easy task and it’s hard to imagine what life was truly like. The world we live in today in no way compares to what America was like during that era. My grandfather helped mold me into the man I am today, and I can attest that the values passed onto me from him were a direct effect of how he grew up. He would tell me, “Always do a job for someone as if you were doing it for yourself.” I would mow his lawn and wash his windows during the summers. He allowed me two paper towels, one to wash and the other to dry; when I was finished, he instructed me to save them for next time. This thriftiness taught me valuable lessons which I continue to practice. He never took himself too seriously and always told me, “You have to laugh.” He would always try to put a smile on your face and would usually succeed in doing so. He succeeded at connecting with people and making them feel special wherever he went.

My grandfather dropped out of school after his sophomore year and worked as an auto mechanic before he joined the Navy. He was inducted April 3, 1944 at 19 years of age. He went on to serve aboard the USS Rushmore (LSD-14) as a Fireman First Class. He served in the South Pacific where they participated in four amphibious landings: The Battles of Leyte, Palawan, Mindanao, and Tarakan.

“The USS Rushmore entered Leyte Gulf early in the morning of October 20, 1944 and after discharging her LCMs, acted as repair ship for damaged landing craft.

At Palawan on February 28, 1945, she landed Army-manned LCMs and other craft loaded with personnel and equipment of the 167th Field Artillery of the U.S. 8th Army.

At Mindanao she carried a record 867 men for a March 10, landing on a beach north of Zamboanga City.

For the invasion of Tarakan on May 1, the USS Rushmore carried U.S. Army-manned LCMs loaded with Australian troops and light tanks. The Australian troops were a battalion of the famed “Rats of Tobruk” which had helped to chase German General Erwin Rommel out of Africa. During this landing, the USS Rushmore was hit by a Japanese torpedo fired from the beach, which fortunately glanced off her hull without exploding or causing damage.

Returning to the Philippines, they loaded a Japanese submarine and carried it to San Francisco to serve as a display to help sell war bonds.” This summary of the Rushmore’s adventures, I found on Wikipedia, which gives me a small insight into his experiences.

His service did not define him, and it was rarely spoken about, if ever. All of his keepsakes, his medals, his uniform, were kept in hiding. I never knew they existed until recently and I will cherish them forever. I truly miss hearing his laugh and his jokes. I miss being able to call and wish him a Happy Veterans Day which happens to be my birthday as well; November ‘eleventeenth.’ This book is dedicated to you and I hope that you would be proud of the man I have become.