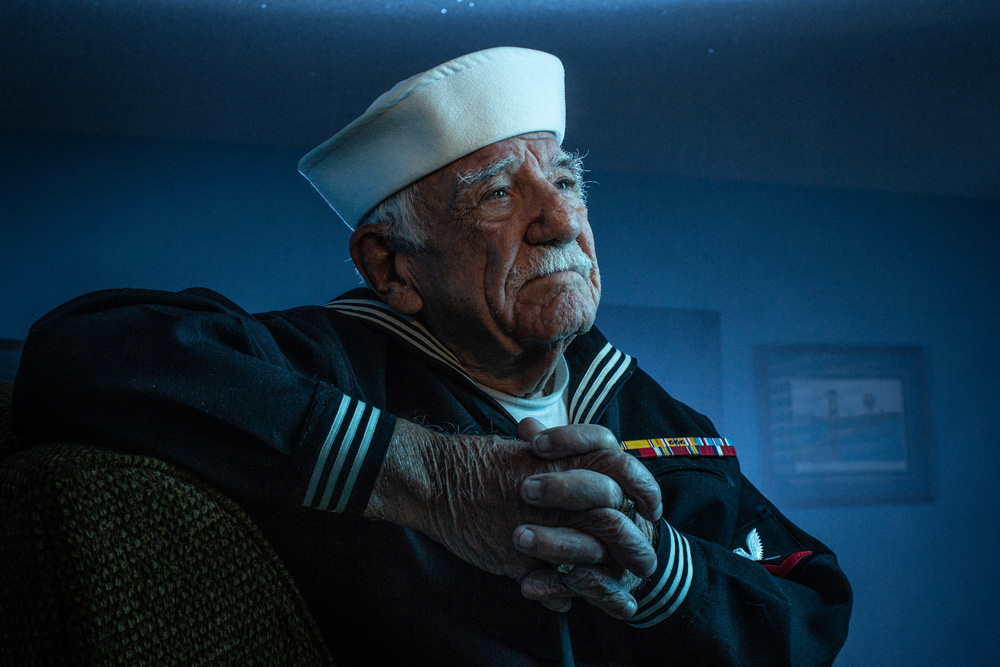 Anthony D’Acquisto loved engines—especially airplane engines—his whole life. So, when he joined the Navy at age 17, it was only fitting that a few months after boot camp he became a Boiler Tender, a job that kept him in the engine room of the two ships he served on.

He enlisted rather than wait to get drafted at 18 because then he could choose the job he wanted. Although Anthony wanted to be a flier, he didn’t have enough schooling. He had left school after eighth grade. “I really didn’t like school!” he laughed. D’Acquisto’s father, a Sicilian immigrant, had served in the Navy in World War I, making Anthony’s choice of branch simple. And his older brother also served in the Navy as a radioman during the war.

Mr. D’Acquisto’s first duty ship was the USS Cottle (APA-147), an attack transport ship that took troops to and from combat operations. Or, as Anthony put it, “We were like a shuttle service!” The ship was on her own rather than part of a task force.

One of his memorable trips aboard the Cottle was when they were on the way back from the Philippines. They stopped at Guam and took 200 Japanese prisoners on board, bound for Pearl Harbor. D’Acquisto often pulled guard duty on the prisoners. “They didn’t like our food. They complained about our food,” he recalled. “They wanted fish and rice. A couple of them spoke English; one of them told me he could jump overboard.” But in the end the prisoners were no trouble at all.

D’Acquisto was headed to San Francisco on the Cottle when he received a transfer to the newly-commissioned aircraft carrier USS Randolph (CV-15) in January 1945, which he served aboard for the remainder of the war.

Although the Randolph’s engine room was much hotter than the Cottle’s because of the size and speed requirements of the ship, D’Acquisto was delighted to be a part of air operations because of his lifelong love of planes. The ship carried Corsair fighters along with dive bombers and torpedo bombers.

During regular duty, he worked 4 hours on and 8 hours off. Off duty, he’d go watch the airplanes take off and land. “My free time I was always topside, walking the deck, watching the planes.”

The Randolph supported the battles of Iwo Jima, Okinawa, and Japan. She came through unscathed, but, while anchored for repairs at Ulithi Atoll, the ship was hit by a Japanese aircraft, killing and wounding a number of the sailors. “I heard the blast and thought ‘My god, what happened?’” It wasn’t long before people came running to the engine room and told them about the hit and resulting casualties.

Mr. D’Acquisto didn’t personally know any of the sailors who’d been killed or wounded, but even decades later the pain shone in his eyes. And he realized how fortunate he’d been. “I was lucky,” Anthony reflected. “I was in the engine room.”

During the battle of Iwo Jima, while the Randolph was anchored a few miles offshore, Anthony remembered watching the planes take off for combat and learning that most of them returned. But even if they did return, sometimes the pilots would crack up on landing, miss the hook, and run into the barrier that kept the plane from crashing into the rest of the planes. D’Acquisto recalled that once one of the pilots was badly injured when a cable snapped and wrapped itself around his head.

His experience during the battle of Okinawa was similar to that of Iwo Jima. In his off-duty time, he’d be up on deck watching the planes. His love of flying never left him. After the war, he joined an air wing in the reserves and got to ride in planes with some of the pilots in his unit.

During the war, they were at sea most of the time, but when they could he and his friends would go ashore on liberty. “We’d drink that cheap beer,” he chuckled. He wasn’t at all homesick. “To tell you the truth, no, I didn’t miss home. I just loved being at sea.”

When the war in Europe ended he was aboard the Randolph at sea, preparing for another combat operation, before realizing the war in the Pacific was likely going to end soon too.

After the war, the Randolph—with D’Acquisto aboard—returned to the U.S. East Coast. They brought back troops from Italy and then were designated a training ship. Their duties included picking up midshipmen from the Naval Academy at Annapolis and taking them to Guantanamo Bay for training.

In 1951, Mr. D’Acquisto, driven by his love of airplanes, went to work for Pan Am Airlines, where he remained for 33 years. He began as “a regular helper and started working my way up. I went to school to get my A&P license, became a master mechanic, and eventually I got to be a supervisor.”

Mr. D’Acquisto chuckled as he recounted how immediately after the war he lived with his parents who by then had moved to San Francisco. For a year he didn’t work but collected his “52-20” before his dad took him down to the fish market where he worked and got him a job cutting up fish. After a short time doing that, he worked at a restaurant on Fisherman’s Wharf before landing a job with Consolidated Airlines in San Diego.

Anthony recalled that once the war ended, being in the Navy was normal. “Sailing here and there, going ashore.” And his advice to young people was, “If you want to go in the military, take the Navy! It was a good deal. Better than roaming around on the ground humping through the mud and stuff like that. You had a shower every day if you wanted it. It was much more pleasant!”