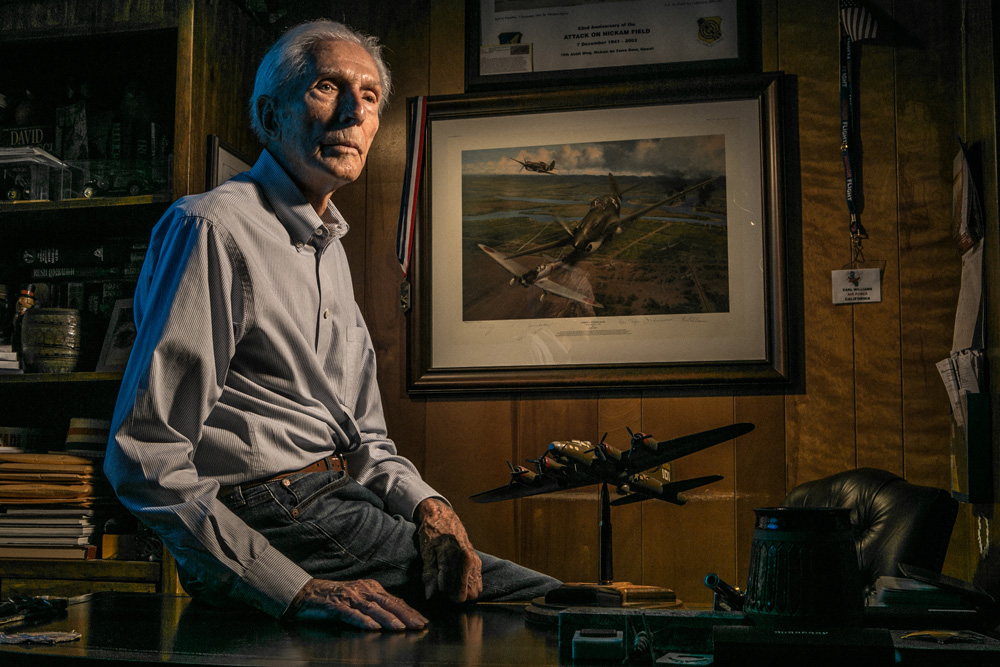 Earl grew up in Martins Ferry, a small town in the Ohio Valley that was hit hard by the Depression. Soon after he was born, his parents were forced out of the independent dairy business by an influx of large dairy companies that moved into the valley. They set up a small convenience store, in which young Earl grew up working with his older brother. Between school and work, Earl found time to participate in the Boy Scouts and obtained the rank of Eagle Scout. Shortly after graduating High School in 1937, Earl realized there was little opportunity for him in a small town still recovering from the Great Depression, and in 1939 he enlisted in the Army Air Corps.

His imagination had been captured by flight from a young age as his uncle had been a Master Sergeant in the Army Air Corps, and Earl had often paid the two-dollar fee to fly on the early Ford Trimotor planes at the local air field.

After enlisting, Earl completed aircraft mechanic school and was sent to March Air Field, in California where he was assigned to the 38th Reconnaissance Squadron in April 1940.  At March, the 38th was given B-17As, which were barely held together with safety wire. Just about the time Earl and the rest of the mechanics got them fixed up, they were given newer B-17Bs and moved to a new air base in Albuquerque. Here Earl was promoted, first to Sergeant, and then to First Class Air Mechanic.

After a short time at Albuquerque, the 38th was given orders to reinforce the garrison in the Philippines. Most of the squadron was sent by boat but Earl and the rest of the aircrews were sent to fly their B-17s by way of Hickam Air Base in Hawaii. They took off late on December 6th, 1941 with nothing but a 2-gallon thermos of coffee for the 14-hour flight.

They approached the islands at dawn, and the sight was breathtaking. Over the headset, the flight surgeon’s voice crackled, “I wouldn’t take a million dollars to miss this trip.” The sun was rising over Diamond Head, and the pilot pointed out the smoke from near the harbor, explaining that it was the islanders burning sugar cane.

Just then, Earl noticed three fighters pass under their right wing flying the opposite direction. The radio operator, who had made the trip to Hickam before, nodded at them. “The navy always sends up a few fighters to bring us into the field.”

Just then the plastic canopy over the radio compartment exploded. Earl, the assistant crew chief, stood up to see what was going on.

Behind them, he saw a fighter so close that he could make out the pilot’s face. He ducked back down into the radio compartment. The fighter’s guns shredded the B-17, ripping through the cotton sound proofing of the radio compartment and filling the air like snowflakes.

The radio compartment caught fire, a situation made worse by the store of pyrotechnic flares that were stacked together. The radio operator and his assistant dashed through the back door of the compartment toward the tail of the airplane, while Earl tried to make his way to the pilot. He grabbed for his parachute, but the fire had already caught it, so Earl abandoned it and climbed forward into the bomb bay, shutting the door behind him. The flames singed his hair as he secured the door and made for the cockpit.

Black smoke was filling the plane, and the pilot was setting it down as fast as he could. He had opened a window to letting out some of the smoke that obscured his and the copilot’s view of the instrument panel.

They touched down in the nick of time. A moment after landing, the fire from the pyrotechnics broke the plane apart at the radio compartment, sending the two halves skidding across the runway.

The flight surgeon turned to Earl with blood spattered on his uniform and asked, “How do you get out of this airplane?”

“Well,” Earl told him. “There’s two ways: out the top escape hatch or down through the entrance door.”

Overhead, another fighter flew by, strafing the already burning plane.

“I’ll go down to the door.” The surgeon decided. Earl followed him, but outside more and more fighters swooped down low, strafing the airfield at ground level, and he decided that next to the landing gear would be a safer spot.

From under the gear, he watched as fighters swept low over the airfield strafing the planes that were on the runway. One of them dropped lower and lower until its auxiliary fuel tank hit the dirt and was ripped from its bindings, bouncing off the ground and into the air. The fighter’s propeller bit into the ground, spraying dirt and gravel until the pilot lifted it into the air and plunged it down on the other side of the airfield.

When the fighters were gone, Earl crawled out from under the landing gear and found the men who had been in the back of the plane when it landed. The bombardier was hit badly, the navigator was bleeding from an ear wound, and Earl was bleeding from a scalp wound. Also among the crew, the assistant radio operator was shot through the hip and groin, while the crew chief had been shot through the shoulder. Of the eight crew members, only the pilot, co-pilot, and radio operator came out of the plane unscathed. The co-pilot helped them find their way to the base hospital, where they were given special treatment because they were aircrew members.

What stuck with Earl was the chaos. Everything was chaos as everyone ran about the Island trying to do what they could to prepare for what might come next. Earl and the rest of the crew spent the next several weeks on Hawaii, repairing what they could and eventually flying 12-hour recon flights.

A few weeks later, Earl and the rest of his crew flew out to Australia, where they piggybacked off Australian installations. From their Australian base, they rotated in and out of Port Mosby, New Guinea to fly bombing and reconnaissance missions in their B-17s.

In November of 1942, now a Tech Sergeant, Earl was sent back to the States, where he served as cadre for establishing organization for the newly built airfields. While there, he received a direct commission as a 2nd Lieutenant and sent to a newly established airfield in Dyersburg, Tennessee, as a Squadron Aircraft Maintenance Officer. It was also there that Earl was awarded the Distinguished Flying Cross for his more than 50 combat and reconnaissance missions flown in the Pacific Theater.

After the war and now a Captain, Earl was put in charge of disposing of the 5,536 aircraft in the Pacific theater. Working with the Foreign Liquidation Commission in the State Department, Earl located the planes that were scattered around the Pacific. Some they used to refill squadrons that were under strength, but most were sold to the Chinese government or civilian contractors.

In one instance, Earl was told to outfit a P-47 group in Guam with seventy-five P-47 fighters. Close to Christmas Eve in 1945, Earl went up to the Far East Air Force Headquarters building and told them the planes were ready. HQ told them that President Truman said they didn’t need them anymore and to pass word that as soon as the airplanes were disposed of, the pilots and ground crews could rotate to the states. The crews, on receiving the word, promptly dumped 75 combat ready P-47s off a cliff and into the Pacific Ocean.

Earl Williams retired as a Colonel, finishing his time in the service as the Vice Commander of the 390th Strategic Missile Wing.