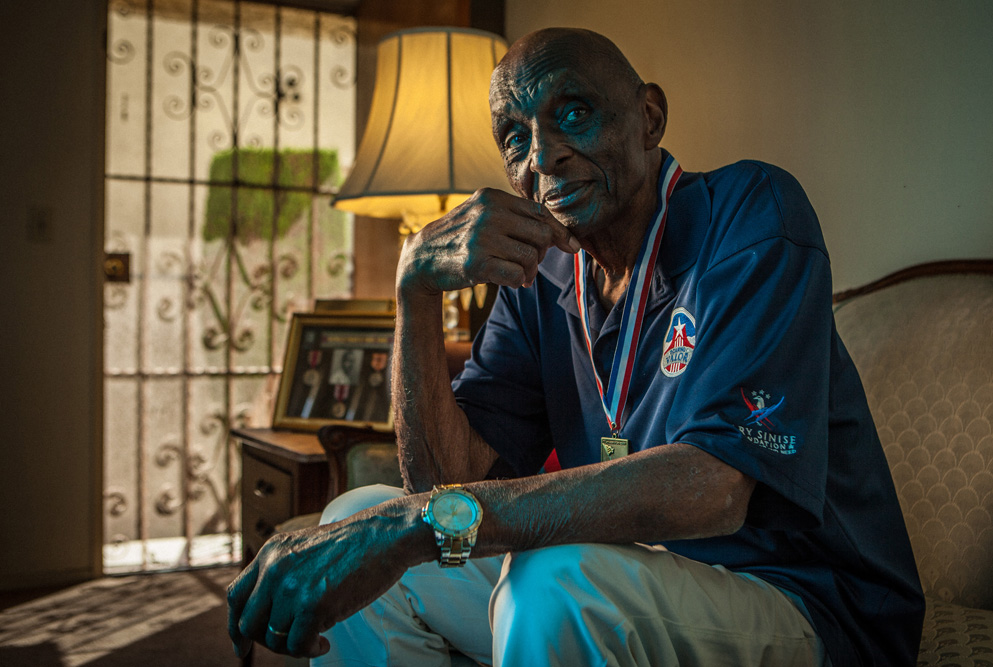 Elmo ran supplies 13 times through the Himalayas to U.S. troops and their Chinese Army allies fighting the Japanese in the jungles of China. “They taught me ways to survive. Be by running water. Know your direction by the North Star. You eat only things the monkeys eat because they know what’s no good. These are survival things because when you’re out in the jungle everything looks the same, no lights, and what have you,” remembered Mr. Espree.

He’d been sent to the front lines so often he figured because he was a rebel, and, as a black man, he always questioned why there was segregation, whether official or de facto: “I thought they were trying to get rid of me.”

The U.S. Army was officially segregated, but that never stopped Elmo from questioning the policies. It particularly perturbed him in India, when thousands of civilians were killed and wounded but were not permitted to be taken to the hospitals in their own country even though British and American troops were.

Even when Espree and his African American unit had boarded the ship George Washington in San Pedro, California for India, he questioned why they were allowed to board first. Then he realized they were given quarters in the bowels of the ship, where the air conditioning was all but useless and they were packed in like sardines.

Mr. Espree was stationed in Assam, India (now Bangladesh). He took whatever the Chinese and U.S. troops needed. “Guns, ammunition, food, you name it,” he explained. “It was just like a Kmart. We supplied (the quartermaster) then he supplied the men who were fighting.”

Each trip was fraught with danger. Snipers were embedded along the heavily forested road they traveled. The climate was nightmarish with two months of monsoon rains and ever-present mud. Malaria and wild animals were a constant concern. “Parachutes only lasted three months,” recalled Espree.

A trip to the front took at least five or six days and sometimes longer, depending on how much forest the heavy equipment operators had been able to cut back.

Back in Assam, he and his friend once had an infuriating experience with the Red Cross in Calcutta when they were refused entry because of their race, despite the sign out front saying all were welcome: “I came 12,000 miles in this uniform to fight the Japanese and you’re telling me I can’t come in here?” he recalled saying.

“We headed over to the Red Cross designated for black soldiers,” Elmo recounted. Although he felt welcome and enjoyed himself, he remained indignant over being refused entry to the first one.

When the A-bomb was dropped on Japan, Mr. Espree was in China. He spoke out against the bombing because of the innocent people who were killed, and he believed the U.S. had nearly won the war anyway without it.

When he returned to LA after the war, he was unable to get a job in transportation. Even when companies advertised they were hiring truck drivers, he’d be told they weren’t. Black men couldn’t join the union either, making it even more difficult to get a job. Eventually, he became one of the first black streetcar drivers in the city, a job he held for ten years. In the end, he always had a job supporting his family, noting, “And always had my health which is more important than material things.”

Although he was passionate about the civil rights movement, constantly reading to keep abreast of developments, he didn’t actively participate because as a federal civil servant there were restrictions in place on the political activity he was permitted to participate in.

But as a self-described black activist after his retirement, Mr. Espree’s focus for decades was on making jobs available for black people, especially young black men, to be able to support themselves and their families. University professors consulted him over the years to learn from his experiences, and his children and grandchildren have been highly educated, some with multiple degrees.

In his 90s, he remained a passionate advocate of the black community. During a visit to the Veterans Museum in Balboa Park, San Diego, he questioned why there were no photos of black soldiers in the World War II collection, and ended up giving an impromptu education to a group of young people about the China/Burma/India theater after they started asking him questions.

Decades after the war, Mr. Espree and his wife petitioned the U.S. government for official recognition of his exploits. He’d kept the original Army paperwork confirming his 13 supply runs to the front, and one day as his wife was going through them she asked him “Where are your medals?” “They didn’t give them to me,” Elmo replied. His wife, finding this unacceptable, spearheaded their campaign, which resulted in him receiving the awards he had earned.

When asked for his advice, Mr. Espree responded, “Be like Canadians. They treat each other all the same… Don’t do the stereotypical thing when you’re around minorities. Know right from wrong, and you’ll stay out of trouble. I tell young people, be ready for change and do something to counteract it because you can’t stop it.” Elmo has spent much of his time talking with young people because as he said, “They keep me young.”

He was emphatic that preparing for the future is critical, not simply living for today, and has made caring for his health an imperative.

Mr. Espree has long been an inspiring example of a man who has devoted his life to service and remained committed to serving as long as possible: “Because the good Lord left me here for a reason.”