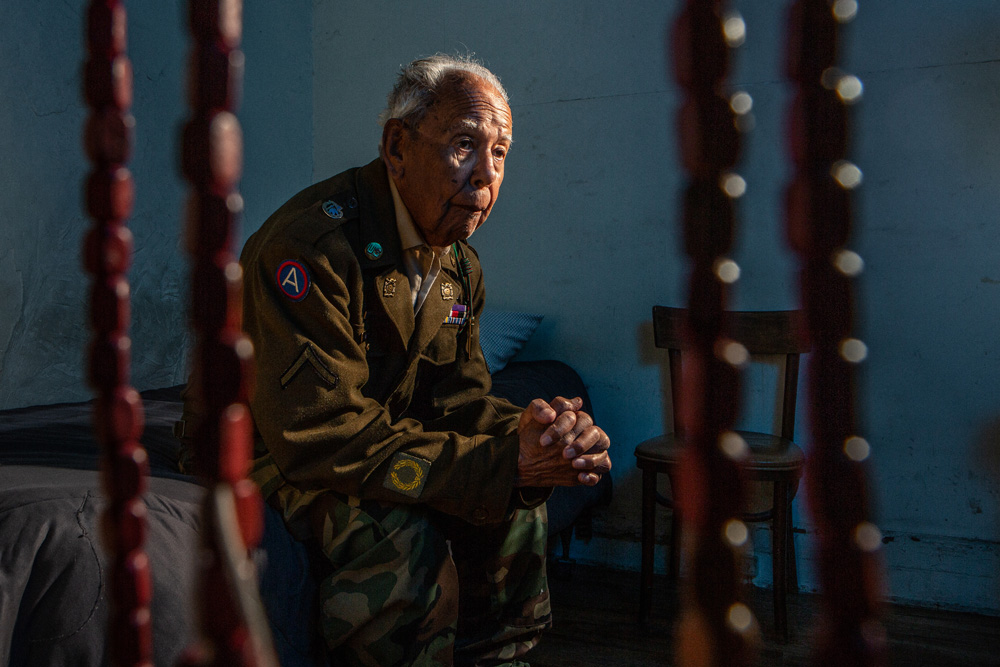 PFC Ernest Martinez was born in the desert village of Tularosa in south central New Mexico in 1921, the first year the World Series was broadcast on the radio. His father died before he was born, and his mother passed when he was 14, so he went to live with his grandmother. He and his five siblings grew up during the Great Depression in a world with no running water or refrigeration. He remembers growing up without shoes and that his childhood was miserable and hellish. He never got past the 3rd grade and finding a job during those trying times proved difficult. Ernest heard about the December 7th Japanese attack on Pearl Harbor over the radio while hitchhiking home. After the broadcast he remembers thinking, “We are going to have to go to war.”

On January 6, 1943, he was inducted into the Army and shipped off to Camp Roberts, California, one of the largest military training facilities in the world at that time. His training continued in Alabama, which he recalls was “hotter than hell” with plenty of mosquitoes to keep a soldier company during the humid nights. He heard that the Army needed paratroopers, who received 50 extra dollars a month for jump pay, so he volunteered and reported to Fort Benning, Georgia, for jump school. Although he was not able to qualify as a paratrooper, he met all the requirements to become an infantry rifleman. He was transferred to Camp Myles Standish in Massachusetts, the departure area for more than a million Allied troops during the war. There he completed his final training and checked over his equipment including his M-1 service rifle.  When it was his time to head overseas, he was sent to the port of Boston and boarded a ship destined for Liverpool, England.

Private Martinez, now a member of the 2nd Infantry Division, sailed to England in January 1944 to continue training for the massive invasion of the European mainland—Operation Overlord—codename for the Battle of Normandy. He landed at Omaha Beach in France on June 7, 1944, D-Day plus one. As the bullets whizzed by and the artillery exploded around him, he recalled telling his fellow GIs: “My ass belongs to the Germans, and my soul belongs to God.” His division was tasked with attacking across the Aure River, liberating Trevieres, on June 10th and proceeded to assault and secure Hill 192, a key enemy strongpoint on the road to St. Lo.

During the battle in an act of frustration, the young soldier mounted a bike and rode towards the German lines with his rifle slung over his shoulder. For no explainable reason, the German soldiers left their defensive positions, possibly dumbfounded by Ernest’s brazen act, and the Americans were able to move forward. Once again Ernest was recognized for his bravery and was awarded the Silver Star.

In the Ardennes Forest, on October 18, 1944, Ernest was wounded in the leg and suffered a broken arm during a German artillery attack. He waited 20 minutes in a German pill box for the artillery to stop and the medics to arrive. He was whisked off to a hospital tent and then off to Paris for surgery. He received the Purple Heart for his injuries. He was transported back to England where they treated his wounds. At the time, he was worried that he may have to have his leg amputated, but the doctors were able to save his limb. He recovered in England for 6 months before being sent back to the States. He departed England in January 1945. As a parting gift from the war, he spent the whole trip back suffering from seasickness.

It felt good to be home after the war even though racial tensions were still a part of everyday life for Ernest. He recalls visiting El Paso, Texas, and reading a sign hung over the door of a local restaurant that warned potential customers, “We do not serve Blacks or Mexicans.” In the weeks, months, and years after returning from the war, he missed being with the whole gang that served so heroically overseas during World War II. After his discharge, he found re-integration with civilian life difficult as he had little education and few skills. He was able to live comfortably off the little money he had saved, supplemented by his benefits as a 100% disabled veteran. Martinez eventually settled in Los Angeles and worked repairing various machines used to make saddles. Throughout his life, he was haunted by the harrowing memories of the war and suffered from what is now known as PTSD. He recalls having to take pills to help sleep at night.  He will not talk about the war unless somebody asks him. At night, he closes his eyes and pictures the hundreds of dead soldiers he saw on the battlefield.

For his heroic actions in Normandy, Northern France, and the Ardennes and for wounds he received in combat, PFC Ernest Martinez was awarded the Silver Star, Bronze Star, Purple Heart, and the Combat Infantry Badge. He reminisced about the time he spent in a living hell in the fields and forests of war-torn Europe and stated simply, “I’m very proud I fought for this country.”