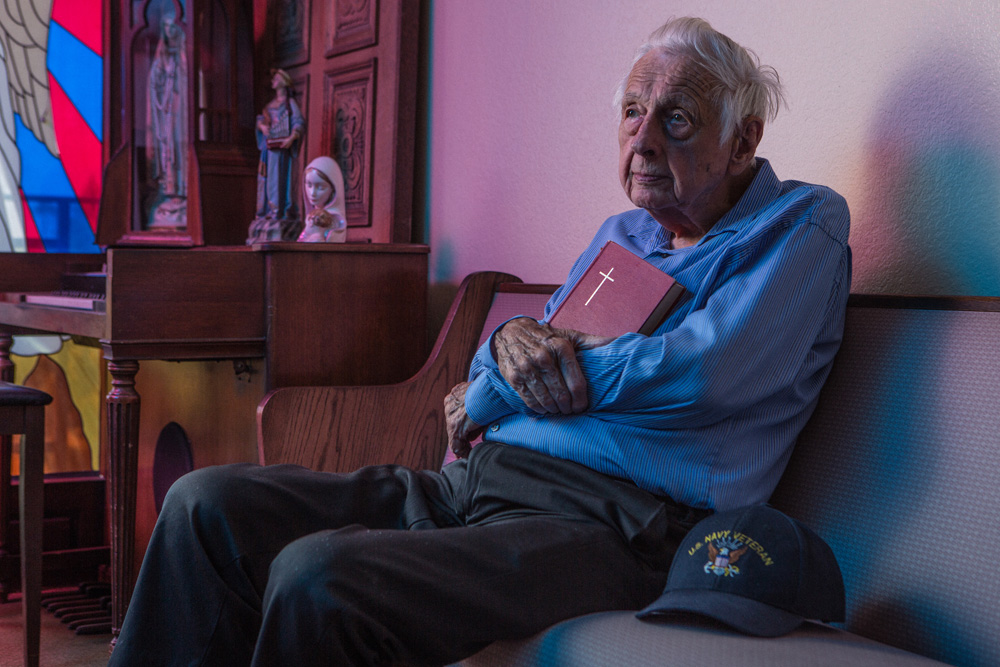 Ensign George Hughes was performing calisthenics and simply “tossing telephone poles back and forth” with other trainees at Fort Pierce, Florida. At the end of the day, the exhausted trainees were told that “in the morning” they would do a little swim. At precisely midnight instructors burst into the barracks rousting them from sleep. Loaded aboard a small boat, they were unceremoniously dumped into the ocean a mile from shore. Hughes was terrified of being in the ocean at night with only a compass and a watch. As he made his way to shore the words of his previous commanding officer rang through his head, “Your swimming is worth more than your engineering.”

Born on June 22, 1918 in Loyalton, California, George Hughes, Jr. grew up in Oakland where both parents taught school. George grew up as an avid card player and competitive swimmer. Throughout his childhood and especially in high school, he practiced boxing, first under the tutelage of his father, a Golden Gloves champion, and later with his high school boxing team. The Great Depression had a tremendous impact, as often school teachers would not be paid, and, to help ends meet, George worked as a delivery boy for three different newspapers in Oakland. Graduating from high school in 1936, George attended Cal State University, playing water polo and completing a degree in mechanical engineering by 1940.

Industrial consortiums were working to expand industrial output, and George, an engineer for Consolidated Aircraft, was in the middle of planning the expansion of the B-24 fleet of aircraft. His goal was to increase production to 400 bombers per month. Because of his work, and the contacts he had working for military contracts, the attack at Pearl Harbor was not unexpected. The greatest difference for George pre- and post-Pearl Harbor was the fact that there was no longer enough time.  His work became all-consuming as demands were ever increasing as wartime production ramped up.

George’s civilian employment came to a screeching halt when George and a few other engineers tried to change companies. Told directly by the Department of Labor that they were war essential workers and unable to quit, George and four others opted to enter direct military service.

Hughes attended his initial 90-day training in Tucson, Arizona, to be commissioned as a Construction Battalion officer for the U.S. Navy, where his commanding officer noted that he was a superb swimmer. Hughes received follow on training at the amphibious training center for Naval Construction Demolition Units established at Fort Pierce, Florida. A strict and rigorous initial training week weeded out the physically challenged members, and a one-mile surprise ocean swim removed others. Completing his training, he was sent to Waimanalo, Hawaii as the commander of a ten-man, clandestine operations team. Training in Hawaii was heavily geared towards the demolition of beach obstacles and testing new equipment. As a “frogman,” Hughes had definite combat roles and missions, but, as he stated, “we were doing experimental stuff…engineering essentially.”  Experimentation and engineering brought no relief from the arduous physical training required in their primary role. Training included weekly 17-mile swims and practice “invasions” of Oahu.

George conducted 6 wartime missions. His first mission was also the most horrendous, resulting in the deaths of two men under his command. Flown by Navy Air to the island of Saipan, the naval commandoes lived a nocturnal life. Already secured by the Marine Corps, Saipan served as a bustling military communications and logistics center. However, Japanese holdouts in the jungle conducted nightly raids, killing, stealing, and damaging businesses and military property. The demolition teams had received jungle training in Florida and were pressed into service to interdict these holdout Japanese raiders. Armed only with battle knives, the Navy men began a nightly routine of observing jungle trails and ambushing Japanese as they sallied forth. Hughes characterized this mission as “killing men at night with knives,” crediting the speed and agility developed by boxing as key to his survival. The mission ended when a sword wielding Japanese officer killed two of the naval commandos. These men were of much more value performing their primary mission of demolition and were withdrawn.

A typical stealth mission involved meeting at the CINC-PAC Headquarters in Hawaii.  Team leaders often received intelligence reports directly from Captain Ellis Zacharias, the leading signals intelligence officer and Japanese linguist. After additional mission specific training, the men would board PBY Catalina flying boats and rendezvous with submarine tenders at sea. Transferred to submarines, they would be transported and inserted near their objective areas. Armed only with battle knives, these men would swim ashore and conduct their missions, return to their submarine and depart.

One such mission had Hughes lead his men in the destruction of a radio station on the island of Formosa (modern-day Taiwan) where “Tokyo Rose” allegedly made transmissions at the time. Luckily, they were not detected and did not see Japanese soldiers on this mission.  Hughes was unwilling to discuss other formerly classified missions but did play a role in recovering some of the Doolittle Raiders along the Chinese coast after their historic mission.  As the war ended, he and his team were training for the invasion of the Japanese island of Hokkaido.

The end of the war saw the dissolution of the underwater demolition teams, and Hughes completed his Naval service assigned to the Engineering Department of the escort carrier USS Munda. Hughes returned to his career in aviation, serving as a project engineer for the AH-56 Cheyenne attack helicopter among other projects for Lockheed Corporation.

Refusing to characterize himself a hero he believes his service was a duty: “When your country’s in danger you are doing it.” Despite the horrors witnessed in combat, his only remark regarding his service is simple and fitting: “Just work. That’s all.”

A deeply religious man with strong opinions, Hughes nevertheless spoke precisely and technically as a lifelong engineer. Noting his own desire on returning from combat to go on a “one-way swim” into the ocean, Hughes was vehement in his criticism of the Veterans Administration for not doing more to assist the returning veterans of today and blamed government bureaucracy for denying these young veterans help. He was little surprised that the veteran suicide rate was so high. He was also quick to observe when asked directly for advice, “Work creates wealth; vacation uses wealth.”