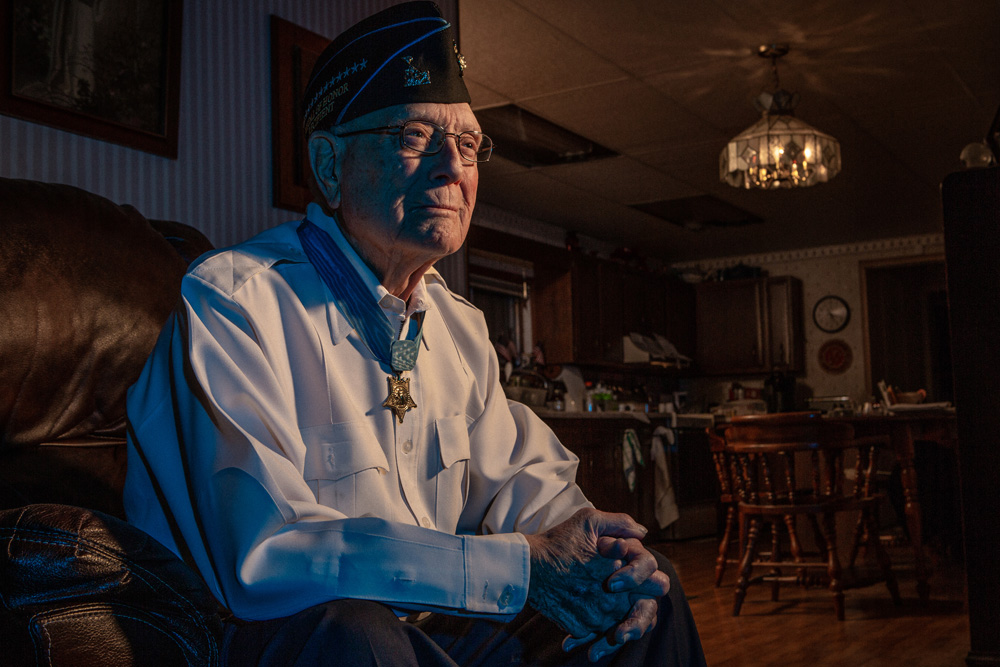 Marines were bored and anxious, as they sat offshore in their amphibious shipping quarters. Corporal Williams was not even sure he would land. Unable to see the island, the Marines could hear an occasional explosion and see aircraft fly overhead, but Williams thought this would be a rerun of Saipan when his unit was not needed and remained aboard ship. At midnight the word was passed for “chow at 0300,” Williams and his fellow Marines knew they would eat the traditional steak and egg breakfast prior making an amphibious landing. The next morning, the Marines climbed down cargo nets into Higgins Boats amidst 10- to 12-foot waves and circled aimlessly for hours before returning to the ship. That evening they again prepared for a landing.  On February 21, 1945 they ate a second breakfast of steak and eggs, but this time the beachhead was large enough that they could land on the paltry 2 ½ by 5-mile island of Iwo Jima.

Hershel Woodrow Williams grew up in the rural community of Quiet Dell, West Virginia, the youngest son of a dairy farmer. His early life of rising early to work and going to bed early was broken only by a few pleasures. The few free moments he had were spent playing games with his brothers, walking to and from school with his neighbors and occasionally going to town to watch a movie or to an uncle’s home to listen to the radio. High school proved to be challenging not because of academics, but because of his work load and lack of transportation.

Williams followed an older brother into the Civilian Conservation Corps and was sent to White Hall, Montana where he worked timber for the U.S. Government. When the Japanese attacked Pearl Harbor on December 7, 1941, Williams was offered direct entry into the U.S. Army. Unwilling to join the Army, he set his eyes on the Marines and was sent home for enlistment under his own terms.  Unable to enlist immediately at 17, Williams worked on the farm until his 18th birthday when he went to the Marine recruiter. Heartbroken, Williams was unable to join the Marines because at 5’6” he was too short. He returned home to work until he was permitted to enlist.

Regulations for the Marines changed, and the recruiter tracked Williams down offering him the opportunity to enlist. Hershel entered the Marine Corps but did not report until May when he was shipped to the Recruit Depot at San Diego, California. Recruit and infantry training were uneventful, as Williams had learned from his father not to question orders and do all tasks to the best of his ability.

Shipping overseas initially to New Caledonia and from there to his wartime unit—1st Battalion, 21st Marines, 3rd Division—at Guadalcanal. On Guadalcanal, he trained for combat duty as a demolition and flamethrower operator. Provided with disassembled flamethrowers and an instruction manual on the assemble and loading, it was up to his section to figure out how to employ the weapons! After trial and error, it was discovered that the best flame mixture was aviation gasoline and diesel fuel, and the ideal technique was to fire a line of flame at the base of the intended target and “roll” the flame into the target at ground level.

Loading aboard amphibious shipping in June 1944, Williams faced his first combat in the Mariana Islands. The landing at Saipan proved to be quickly accomplished and his 3rd Marine Division remained in reserve off shore during both the Saipan and Tinian landings. However, Williams did not have long to wait, and in July 1944 went ashore on the island of Guam. The conditions and terrain on Guam saw Williams fighting with a rifle instead of his flamethrower.  Surviving two Japanese Banzai attacks, Williams concluded that “for them to die in war was honor, but we [Americans] will do everything to survive and help our fellows.” Despite the anxiety of fighting in the dense jungles, and the horrors of combat and mopping up operations, the island was secured in August.

Resting, refitting, and honing his skills, Williams remained until February 1945 when he loaded aboard shipping for an unknown operation. He soon learned it was Iwo Jima. After the first aborted attempt to land, he came ashore on the 3rd day of the battle. Corporal Williams was horrified at the chaos and carnage but continued doing his job to the best of his ability. Pushing into assigned positions at the edge of an airfield, Williams observed the American flag on Mount Suribachi, and then plunged headlong with his fellow Marines across the wide-open spaces of the airfield.

After taking horrendous casualties in crossing the airfield, his unit incurred a line of reinforced concrete pillboxes blocking the path, and Williams’ commanding officer asked if he could destroy the pillboxes. Saying simply “I’ll try,” Williams picked four Marines to provide cover fire and maneuvered towards the pillboxes. Williams crawled from cover and moved towards the first pill box, but his pole charge man, who was to hurl explosives into the pillboxes, was struck a glancing blow to the helmet by a bullet and went down. Williams continued the attack alone. Crawling into the crossfire of mutually supporting pill boxes, Williams methodically and relentlessly destroyed one position after another. Returning several times over the next four hours for more flamethrowers, Williams proved “instrumental in neutralizing one of the most fanatically defended strongpoints” of the campaign.

This was Williams’ last battle of the war and he returned home for discharge in November 1945. His last duty was to report to the White House where President Truman awarded him the Medal of Honor for his actions on February 23, 1945.

Williams remained in the Marine Corps Reserve retiring as a Chief Warrant Officer Four and later had a career in the Veterans Administration. Williams’s most satisfying and fulfilling experience has been working for the families of deceased military members. Working tirelessly, Williams assisted in the erection of the first Gold Star Families Memorial in a cemetery of Williams’s home state of West Virginia on October 2, 2013, which has been followed by more in almost every state and dozens of communities. As of this writing, 47 Gold Star Families Memorial Monuments are complete and 53 are in process in 41 states.