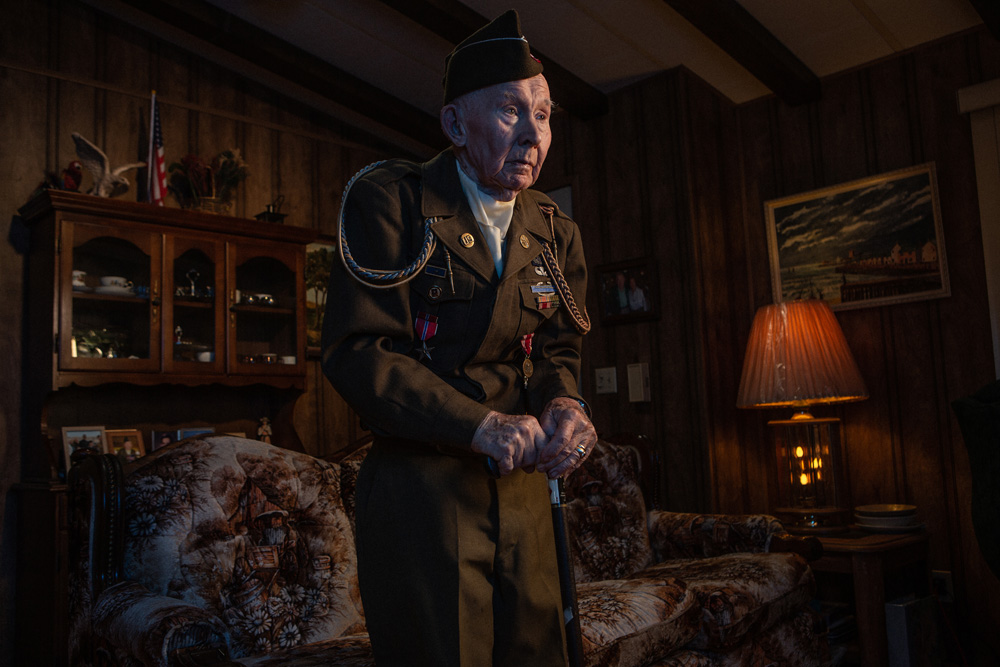 “We’re looking for volunteers for the Airborne.” Twenty-two-year-old Joseph Reilly was stationed at Camp Robinson, Arkansas for infantry basic training when two officers made the offer. “If you’re successful at jump school, you’ll get your wings and be a qualified paratrooper.” Also, paratroopers were paid an extra $50 a month, double what Joseph was currently making in the infantry. He quickly volunteered.

He was sent to Fort Benning, Georgia where he made his five qualifying jumps with the 541st training unit. He’ll never forget the feeling of jumping from 1,200 feet, realizing all at once the danger and thrill of falling through the sky. The jumpmaster ordered the paratroopers to “stand up and hook up” on the static line which ran the entire length of the C-47. The static line was hooked to the troopers’ backpacks and upon jumping released the chutes. The red light by the door flicked to green, indicating it was jump time. There was no going back. Joseph jumped through the open door to the sound of roaring of engines thundering in his ears. The noise was abruptly replaced by the quiet, peaceful atmosphere of the sky as his chute opened and he gradually glided to land.

He was transferred to Camp Mackall, North Carolina for further training before being shipped overseas to southern England in the spring of 1944. Joseph became part of the HQ 3rd Battalion, 501st Parachute Infantry Regiment, 101st Airborne Division. He was a radio operator and carried 150 pounds of equipment on his jumps. His job was to relay communications to battalion and regimental headquarters.

Joseph’s first combat mission was the invasion of Normandy on June 6, 1944. As he prepared to jump behind enemy lines at 3:30 a.m., he could see the armada of U.S. ships crossing the English Channel, silhouetted against dim shades of early morning light. He saw C-47s flying beside his own. Some were struck by anti-aircraft fire off the coast of Normandy and immediately became engulfed in flames. Paratroopers were dropping too early and drowned in the English Channel, while others were shot by Germans on their descent to land. Fortunately, Joseph made a safe jump and ended up exactly where he was supposed to land. He saw the outline of trees as he touched down in a little pasture near Utah Beach. “Right beside me landed the colonel of the 502nd regiment. We went from that little pasture to another one, gaining more stragglers until we finally had 100 people in our group.”

The Airborne stragglers were divided into two groups before forging into their first day of combat. Their objective was to neutralize the area and decrease enemy fire for the 4th Infantry Division before they came ashore on Utah Beach. The terror of June 6th lasted from 3:30am to midnight for Joseph and the Airborne divisions. Physically, he was exhausted and sweltering from the heat. Mentally, he was coping with the first day of combat and the death of his friends.

Joseph served thirty-nine days in Normandy, completing the objective of the 101st Airborne. He was then was put aboard a British vessel and returned to his base camp in Cherbourg, England where he was able to take a shower and eat a hot meal. His unit trained for the next two months and gained new recruits before their next campaign. During the interim, Joseph and his comrades received a seven-day furlough. They decided to spend their time at the Belle Vue Amusement Park in Manchester, England. It was there that Joseph met and fell in love with an English girl named Ilene. She promised to write him a letter every day and kept that promise.

On September 17, 1944 Joseph was back in combat, jumping into Holland during Operation Market Garden. Unlike Normandy where they jumped in the early hours, Holland was a daytime jump. The 82nd and 101st Airborne Divisions were under British leadership during the operation, fighting to free the Netherlands from five years of Nazi occupation.

“It was a disaster,” Joseph remembered. The American troops thought the British didn’t make up their minds fast enough and weren’t as aggressive as they should have been in the situation. The Airborne divisions had to take their orders from the British even if they didn’t agree with their tactics.

Joseph was in Holland for seventy-three days before going to a base camp in Reims, France. On December 16, 1944 an order came at two in the morning. The 101st had to board trucks immediately for another mission. Joseph climbed into the back of a truck in the bitter mid-night cold. They were told they were headed for the front. “Where the hell is the front?” They all wanted to know. “Bastogne” was the reply.

The drive took thirteen hours until they reached Bastogne, Belgium. Joseph saw U.S. soldiers walking along the road leading out of Bastogne. “I thought they had taken care of the area. They hadn’t taken care of area. They were surrendering.”

Joseph and his unit walked right into Bastogne as other units were retreating. He couldn’t believe what he was seeing. “In combat, you’re either an aggressor or a coward. No Airborne division would ever be called a coward. Never. You go in and fight the Germans. You don’t come out and retreat. We never retreated.”

It was coldest winter on record in Belgium, and most of the U.S. soldiers didn’t have proper winter clothing. Among the paratroopers, they had raincoats, their regular uniform, and some only had fatigues. When they came across dead soldiers, they took their overcoats to stay warm. By December 18, they were completely surrounded by German troops in the Hurtgen Forest north of Bastogne. Artillery landed close to where Joseph was burrowed down in his foxhole. He could feel the reverberations shaking the frozen earth. Christmas Eve came with more fighting and the German bombing of a U.S. military hospital in Bastogne. The 101st fought hard and long to defend their position until January when General Patton came with heavy artillery and neutralized the area. “We were happy to see Patton come in with tanks.” Within three days, the 101st Airborne was relieved of their position.

Right after Bastogne, the 101st was sent to Strasbourg, France along the French-German border where the 42nd Division was trying to hold off a German battalion. “In three weeks, we cleaned up the whole damn mess.” On March 31, 1945 Joseph took his furlough and returned to Manchester, England where he married his war bride Ilene. It was Easter Saturday.

The 101st took Hitler’s Eagle Nest at Berchtesgaden in May 1945. The war ended on May 7th, 1945—Joseph’s twenty-fourth birthday. Standing on the defeated ​Führer​’s balcony overlooking the Swiss Alps was a good feeling, but he would never forget his comrades who didn’t live to see the end of the war. “A lot of close friends got killed. We lost a lot in Normandy, a lot in Holland, and even more at Bastogne.”

Joseph returned to the states on December 31, 1945 and was honorably discharged at Fort Sheridan, Illinois. Ilene came to the United States with their first-born daughter on May 12, 1946. They raised three daughters in Wisconsin where Joseph worked for the Parker Pen Company. This brave paratrooper had no regrets and was proud of his country and those who defend its freedom.