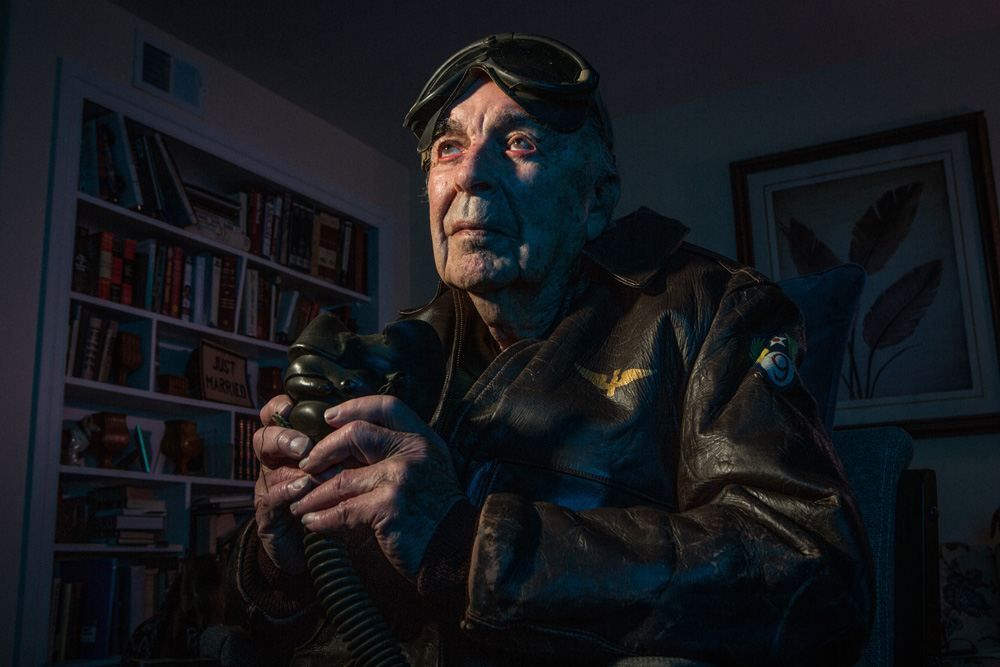 Leonard Zerlin was aware of what was happening in Germany years before the United States entered World War II. He remembers his grandfather reading a Jewish newspaper to him in Yiddish. “Grandpa, what’s happening?” he would ask as a young boy, deeply interested.

His grandfather told Leonard about Jewish persecution in Germany and families he knew that were taken from their homes. Leonard also listened with anger to radio broadcasts about the German Blitz over London. It bothered him that the United States was doing nothing. This acute awareness would later propel Leonard to enlist in the Army Air Corps and fight to help end Nazi persecution.

After the attack on Pearl Harbor on December 7, 1941, Leonard decided to take an aircraft engineering course in New York for three months to get a head start before enlisting. He loved the idea of flying and knew that the Army Air Corps was where he wanted to be. When Leonard told his parents he was enlisting, they begged him to reconsider and obtain a defense job instead. Everybody tried to talk him out of it, but Leonard and his friend took off for Grand Central Station to sign-up. When it was Leonard’s turn, he was almost sent home.

The doctor shook his head when he saw the hole in Leonard’s back caused by a childhood operation. “We can’t accept you. Go home, kid. Get a good defense job. Your parents will be very happy to see you back.”

Leonard wouldn’t take ‘no’ for an answer, not after finally convincing his family he was going. He asked for another opinion. The doctor hesitantly agreed and called in Dr. Horowitz. After Leonard explained that his back wouldn’t be a problem, Dr. Horowitz asked his reasons for enlisting. His answer was direct. “Pearl Harbor was attacked, and he knew the Jewish community was disappearing in Europe.”

Leonard’s drive to fight for the freedom of others caused Dr. Horowitz to give the ‘all clear’ for his enlistment. If he had accepted the first doctor’s opinion, his life would have been vastly different.

Leonard underwent six weeks of boot camp at Fort Dix, New Jersey, an intense experience of misery and hard training that created a brotherly bond between the soldiers. After boot camp, Leonard went to South Carolina to train on the B-26, an aircraft that was nicknamed the “widow maker” because of its high accident rate, especially in training. The short wingspan made the B-26 more maneuverable than other bombers, and its speed matched that of fighter planes. Before they were even in combat, Leonard lost comrades in training accidents every week. Eventually, the B-26 became safer, but only after severe loss. Leonard served as the aerial engineer and top turret gunner.

His crew was stationed in England, thirty miles from the English Channel. They were the closest bombing group to the channel and were frequently attacked by German Luftwaffe who were bombing their airstrips. The airmen dug foxholes outside the perimeter of the airstrip to protect themselves against nightly raids. One evening on base, a new recruit named Rick arrived. He jumped in the cot next to Leonard and fell asleep. Leonard and his comrades didn’t have a chance to warn him about the nightly bombing raids until the sirens sounded. As everyone hurried to their foxholes, Leonard shook Rick awake, shouting at him to get in his foxhole. Leonard soon found out that the orderly never told Rick to dig one. “Well, you better get the hell up because we’re gonna be bombed pretty soon,” Leonard warned.

They both took off into the night. Leonard could feel the concussions as he ran to his foxhole. He stopped short when he discovered it was occupied by Rick and there was not enough room for the two of them. Leonard trying to pull him out, but Rick wouldn’t budge. By now the concussions were so bad that they knocked the wind out him. Leonard kept running, until he dove on the cold, wet ground and covered his head.

When he finally heard the all clear siren, Leonard was flaming mad as he prepared to tell Rick off. That’s when he saw a group gathered around his foxhole. One of the bombs landed in his foxhole, destroying Rick. They couldn’t even find his dog tags. Leonard was shaken hard from the experience. He wasn’t allowed to fly for three days as he tried to process Rick’s fate and how close he had been to his own death.

Leonard’s first mission was to the mountains of Holland. Their objective was to locate and bomb the area where Germans were assumed to be working on the V-1 rocket. They spent close to five hours trying to locate the area in horrible weather and finally headed back to base without ever finding it. The crew was told to go back in three days to find the target. In the meantime, Leonard was experiencing pain in his shoulder. What started out as a blister grew into a large sore that had to be cut open and stitched up. He was grounded for three days.

Leonard had to miss his second mission. The worst part was watching his group take off without him. After a few hours, he went to the control tower and waited for the group to come back. After six hours, they lost radio contact with the planes. The twelve planes on the mission never came back. It was assumed that they had engine problems, but months later they learned that half of the planes crashed while the others were shot down. The airmen on Leonard’s plane—men he went through training with—were killed. This was the second time Leonard cheated death.

One mission will forever be stamped in Leonard’s memory. As they were reaching their target, the bombardier pulled the cable to arm the bombing pins and let the bomb load drop. One armed bomb didn’t release and was hanging from the belly of the aircraft. Because he was the smallest, Leonard was told to go down to the bomb bay and release it. He took off his flak jacket, parachute, and heated gloves before dislodging the bomb cabling with a screwdriver, all the while being hung out of the catwalk by his feet in -30-degree temperature, thousands of feet above the ground.

After they returned to base and debriefed the missions, one of the airmen recounted the events of Leonard’s heroic feat. A month later, Leonard was notified that he was to receive the Silver Star for his actions that day. Leonard was honorably discharged from the Army Air Corps on November 11, 1945.