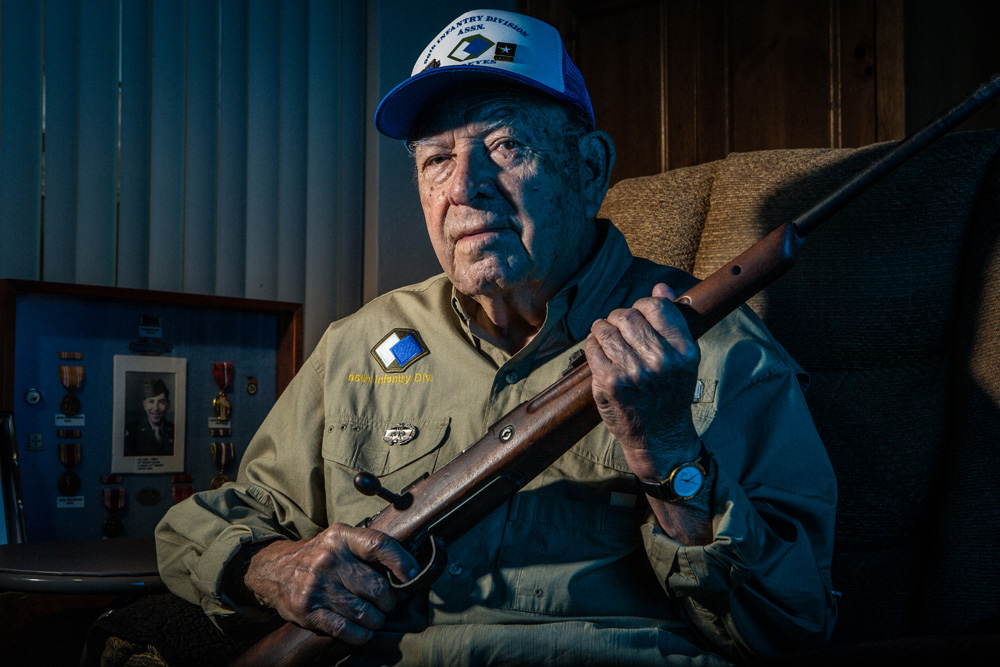 Louis Cañedo was born to a loving family in the Logan Heights neighborhood of San Diego, California. His father Joseph was from Mazatlán, and his mother Pauline was born in San Jose del Cabo in Baja, Mexico. Louis and his older brother grew up in a close-knit community during the Depression where the local kids played together on the streets. Through the Depression, the Cañedo family always had food on the table and their father always had work. Joseph worked as a chef in Tijuana and later worked for U.S. Grant, a luxury hotel in San Diego. Pauline worked part-time at the local laundromat. At 7, Louis sold 5 cent newspapers and made 10 cents a customer shining men’s shoes in town. As he got older, he drove a grocery truck and delivered fruits and vegetables to stores, giving his pay to his mother. He was at a football game at Balboa stadium on December 7, 1941. The game was interrupted, and it was announced over the loudspeaker that Pearl Harbor had been bombed. All military members were instructed to report immediately to their duty stations. Louis received a draft deferment so he could graduate from St. Augusta High School. He did so on June 6, 1944, the same day as the D-Day invasion of Normandy.

Some of his friends who received draft notices headed back to Mexico to avoid the war, but not Louis. He was not about to do that. Instead he reported to Camp Roberts located in central California. He was one of 436,000 soldiers to train there during World War II. Training was scheduled for 16 weeks at the camp that taught young men to become U.S. Army infantryman, but training was reduced to 13 weeks due to the immediate need for U.S. fighting men in the Pacific. After training, he joined the men of the 96th Infantry Division at Fort Lewis, Washington. They boarded a crowded troop transport ship bound for Hawaii. He spent two weeks in November and December completing jungle training in Hawaii, afterward sailing on to the island of Saipan for additional exercises.

On Easter Sunday in 1945, three Army and two Marine Corps Divisions landed on Okinawa with a force of more than 180,000 men. When Louis arrived a week after the initial invasion, he had been assigned to a radio outfit. His unit, the 381st Infantry Regiment, was assigned to move to a reserve position on May 10 to relieve a unit from the 7th Infantry Division. His regiment had lost most of its medics in the fighting, so he was reassigned to care for wounded soldiers. As the 381st IR closed in on the front lines, he remembers one of the biggest battles near Conical-Oboe Hill area where the Japanese had set up artillery pieces hidden in caves. Fighting was intense, and in many cases, American GIs had to fight their way through three lines of Japanese resistance to take their objectives. The only saving grace was that the rifling on the Japanese guns had worn down, sending most of the rounds tumbling harmlessly at the American GIs. The battle for Okinawa was one of the bloodiest in the Pacific—although a victory for the U.S.—casualties were heavy with over 7,000 Soldiers and Marines killed and 32,000 wounded.

Louis treated the wounded on the Island of Okinawa while the fighting raged around him. On one occasion, the young medic was notified by his company commander that several U.S. soldiers near the front lines needed medical care. He quickly moved to the front and located the wounded men, loaded one on a stretcher, and with 2 walking wounded, escorted them 150 yards back to the American position and safety. Louis recalls that at one point during the rescue mission he was so close to the enemy he could hear the Japanese soldiers talking amongst themselves. He got those wounded soldiers out alive and later was awarded the Bronze Star for his heroism. Throughout the battle, “Doc” treated soldiers for sucking chest wounds, applied tourniquets and treated shrapnel wounds. He was grateful that no soldier ever died in his arms. The Japanese eventually surrendered the island in late June 1945. Louis concluded his Pacific Theater service on the Island of Mindoro in the Philippines. There he was ordered to report to the local doctor—an Army Captain—who put him at-ease and ordered him to enjoy a cold beer. It was the first luxury he enjoyed since arriving overseas and he appreciated it. To cap it off, the laid-back Army doctor promoted Louis to Corporal.

Back in the States, Louis was officially discharged at Camp Beale in Yuba County California in November of 1946. He was issued a $500 discharge bonus and sent on his way. He took the train back to San Diego and finished the trip with a cab ride to the front door of his parents’ house. His father, who had saved a special bottle of French champagne for that moment, uncorked it, and Louis celebrated his return with family and friends. After the war, jobs were scarce for returning GIs, but his brother was able to secure Louis a job at a local rendering plant. He met his wife at a youth group, and they were married on September 5, 1948. In 1965, he took a good job at Westgate Tuna company but left to attend college at the University of California at San Diego where he majored in biology. A devout Catholic, he joined the Knights of Columbus in 1947 and achieved the level of a 4th Degree Knight, a highly respected small brotherhood who don the feathered hat and wear the white-handled silver sword.