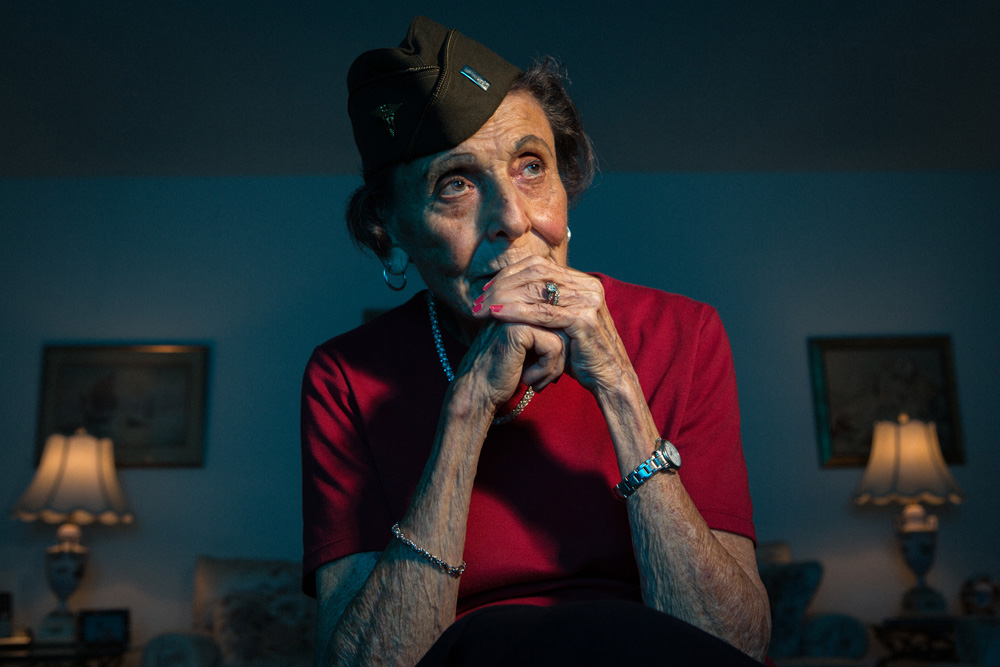 Muriel always wanted to be a nurse. After graduating from high school, she applied for nurse’s training in Cambridge, Massachusetts. While in her second year of training, Pearl Harbor was bombed and war was declared the next day. Muriel and her classmates knew that nurses would be needed and upon graduation a year later, Muriel enlisted in the Army.

She was commissioned a 2nd Lieutenant in the Army Nurse Corps in April 1943, and her first post was at Fort Adams, Newport, Rhode Island where she cared for everyday illnesses and accident cases. As the war in Europe heated up, Muriel requested overseas duty and was soon sent to Fort Devens, Massachusetts to join up with the 16th General Hospital. For six months, the nurses trained with fifteen-mile hikes, daily calisthenics, classes in communicable diseases, learning how to descend a swaying rope ladder under full backpack, and going through the Infiltration Course on hands and knees under live ammunition.

Finally, the last week in December 1943, they boarded ship for Liverpool, England. Because their hospital was not yet ready for operation, the hospital personnel remained on detached service with the nearby 304th General Hospital. Many of the staff were there as patients because they had developed the “English Hack,” a body wracking cough from the cold, damp winter weather. As the weeks passed, time was spent setting up the 16th General Hospital in preparation for the coming invasion of France, date unknown at this point.

On June 6, 1944, D-Day arrived, when the Americans crossed the English Channel and invaded the German held Normandy coastline. About 6 weeks later the 16th General Hospital debarked at Utah Beach in a trip that should have taken 3-4 hours to make the twenty-one-mile crossing but took three nights and almost four days because the Channel was still littered with the debris of fallen planes and half-sunken ships from D-Day. Complete blackout conditions had to be maintained at all times as German planes were still flying overhead, and even a lighted cigarette could prove disastrous for the Allies.

The hospital unit camped out in a Normandy cow pasture for the next seven weeks waiting for the Germans to be cleared out of Liège, Belgium so that the hospital could move up to Belgium and establish their tent hospital in an apple orchard on the outskirts of Liège. The surgical tent where Muriel worked 12-hour night shifts was where patients who came out of surgery went. Even with all the training, the sights and effects of war were hard: “We had no idea it would be as bad as it was. It seemed as though every patient that came in had some extremity amputated.”

Soon after their arrival, in November, Hitler started sending ‘buzz bombs’ into Liège to cut off all supplies and transportation to the Americans. These buzz bombs, each carried two thousand pounds of explosives and came over every twelve to fifteen minutes, twenty-four hours a day for the next two and a half months. As Muriel remembered, “Our hospital was hit three times, destroying tents and killing and wounding hospital patients and personnel. You’d hear them coming in the distance, putt-putt puttering along, and your heart would sink.”

On November 16th, the U.S. Army began an offensive against the German troops. Muriel recalled the one thousand beds in their hospital filling up almost immediately: “It was very difficult for us not to show any signs of emotion because they were so young, so handsome, and yet you knew that many of them would never have a normal life again.”

Then came December 16th with German General von Rundstedt’s counterattack into Belgium, starting the Battle of the Bulge. At the result of a heavy fog that engulfed all of Belgium the week before Christmas, the German troops had advanced and were now a mere, ten miles from Liège. Although you could barely see five feet in front of you, the German tanks and infantry were able to move forward on the ground, but American planes couldn’t get airborne to bomb them. Most of the other hospitals in the region had evacuated, but not Muriel’s. Instead, the nurses were told to pack their musette bags with warm clothing and first aid supplies in case they were captured. Muriel remembered packing the French perfume purchased in Paris months earlier and her cigarette ration “because a pack of American cigarettes could go a long way for bartering in war-torn Europe.” I was more scared than most because I had that ‘H’ for ‘Hebrew’ on my dog tags.”

All planes had been grounded for a week because of the fog, but on Christmas Eve, the fog dissipated, and a full moon arose. “I heard the sound of a motor and knew from the sound it wasn’t one of our planes. We had learned early on to distinguish the sounds of German planes from ours. I stepped outside the tent to take a look. All these red flares were dropping through the sky. The plane flew back and forth over the hospital tents and nearby enlisted men’s tents, dropping antipersonnel bombs and strafing the tents. Many patients and hospital personnel were killed or wounded that night. It was a night of horror.”

Morning arrived again, bringing an end to Muriel’s shift. “Going off duty with a couple of other nurses, we straggled down the path to the nurse’s quarters, too empty and spent to even talk. A nurse coming on day duty greeted us with a muted ‘Merry Christmas.’…It sounded absolutely ludicrous because we didn’t even know what day it was.”

As Muriel recalled, “Christmas Day had dawned, bright and clear. The buzz bombs were out on their 12-15-minute visits as they had been during the fog bound week but our planes were out and so were the German planes and we watched as they engaged our planes in dog fights as spent machine gun bullets fell around us. Christmas week was a nightmare with German planes coming over every night to drop German paratroopers dressed in American uniforms to infiltrate every American base. Fortunately, things would get better. By the end of Christmas week, more of our planes were seen in the sky and they soon outnumbered the German planes. Over the next two weeks, we saw huge, constant waves of our planes by day and those of the RAF at night. It was the most heartwarming sight and sound in the world.”

American troops advanced into Germany, crushing the resistance and destroying buzz bomb nests. But without the buzz bombs and threats of capture, life at the 16th General Hospital became more peaceful. Finally, V-E Day came on May 8, 1945, when the Germans surrendered. “Everyone was so happy. You were just singing and yelling and drinking and dancing. It was wonderful.”

However, work wasn’t over yet. In July, ordered to leave Liège where they had tended to 25,000 wounded, the 16th General Hospital headed back to France where Muriel’s job was altered a little. She now had 600 German prisoners-of-war to look after. “I had to take care of these krauts who had been trying to kill me and millions of others. But we did it because this was our job.”

Muriel arrived back in Meriden shortly before Thanksgiving. She remembers the taxi driver planking her Valpak on her mother’s porch, and two of the three bottles of French champagne she had carried home from France were smashed, but one bottle did survive. “On Thanksgiving Day my brother-in-law opened the champagne bottle, and the noise that it made sent me flying under the table and I burst into tears.” Years later, loud noises still rattled her.

In January 1946, Muriel received her discharge papers. After a 75-year delay, in July 2018, she was presented with the Chevalier of the National Order of the Legion of Honour, France’s highest order of merit for military or civil service. To find out more about this fascinating woman’s life, you can read her memoir, Mission Accomplished: Stop the Clock.