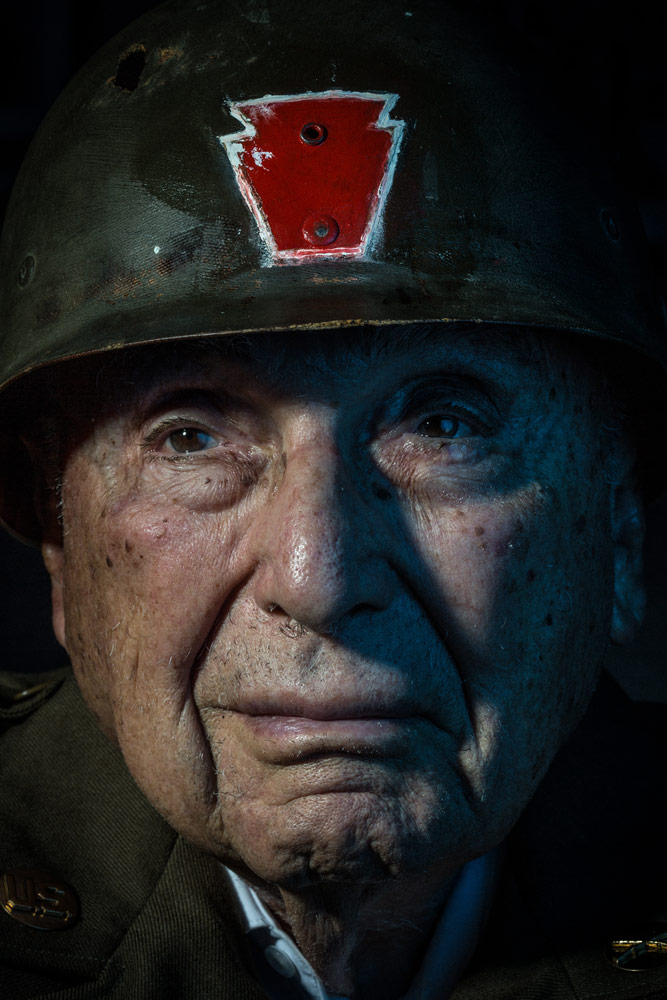 Murray Shapiro was born at the Bonny Brae Maternity Hospital off Virgil Avenue in Los Angeles, California. Long before serving in the U.S. Army, he was raised to appreciate living in the U.S.A. and developed a sense of patriotism that he learned while spending the summers with his father. His parents had divorced when he was young, and he lived with his mother and step-father and grew up with two half-brothers and two half-sisters. Like many young people during the Great Depression, Murray toiled at tedious and low paying jobs. He worked at a local fertilizer factory at the age of 13. It was very tough work, and it paid only 50 cents a day. In high school, he recalls the ROTC drill team crating up Enfield and Springfield rifles that were shipped overseas to the beleaguered British Expeditionary Force after their withdrawal at Dunkirk from the advancing German Wehrmacht. Murray graduated high school in the summer of 1941 and joined the ROTC program at UCLA. He recalls standing on his mother’s terrace on Sunday, December 7th and hearing the radio announcer interrupt Leopold Stokowski’s NBC Symphony Orchestra to announce that Oahu had been bombed by the Japanese. His first thought was, “I gotta get into this.” Murray wanted to get overseas and fight. He enlisted in the Army and departed to Camp Roberts then to Officer Candidate School at Fort Benning.

Early in 1944, Murray sailed across the Atlantic to England on board the RMS Mauritania, a luxury liner that had been converted to a troop transport ship by the British. The living quarters varied significantly for the enlisted, non-comms and officers. Enlisted soldiers had to find creative ways to take a warm shower and sleep comfortably on the cramped ship. At that time, he was an infantry rifleman at the rank of private. On June 9th, he and the men of the 3rd Battalion, Company M, 112th Infantry Regiment, 28th Division, on their assault on Normandy at the Easy Red sector of Omaha beach. His unit arrived on an LST due to the lack of operational LCPV landing craft. They had arrived on the third day of the invasion and most of the intense fighting was going on farther inland. On the bloody beach, Murray remembers seeing the bodies of dead Americans floating in the surf. Because of his advanced training as a rifleman, he was promoted to Buck Sergeant in charge of a heavy machine gun crew. His unit fought their way through Luxemburg and Belgium on the way to Germany and victory. He was subject to a constant bombardment by artillery, mortar fire and German soldiers tossing Stielhandgranate grenades, known as “potato mashers” to Allied troops.

In Belgium, he fought in the heavily forested Ardennes mountain range. At one point, the German army lit the forest on fire to drive out the advancing American army. The weather hit both armies hard, and Sergeant Shapiro remembered that it was the coldest winter of his life and the coldest on record in 50 years by locals. During the fighting, he survived several close calls with German soldiers that left several of his buddies as “walking wounded” or outright dead. He recalled surviving a shot from a sniper who missed and hit his rifle stock instead. On another mission, several jeeps were damaged, and soldiers wounded when Army engineers inadvertently tripped a German “Bouncing Betty” S-Mine, armed with hundreds of ball bearings. Murray caught a ball bearing that passed through his steel helmet and cut a groove in his wool knit cap. Fortunate and unharmed by the mine, he continued to march on, creeping and crawling in the forest around German soldiers while behind enemy lines.

On December 16,1944, in the last major offensive of the War in Europe, 410,000 Wehrmacht troops and the 6th Panzer Army rolled towards Bastogne. Murray was caught off guard along with the rest of the Allied Army, and he again found himself lost behind enemy lines. He wandered alone for eight days after getting separated from a scouting mission. He survived on a can of corn beef hash he found on a dead American soldier. He also found relief at a farmhouse where he was fed and offered shelter. Eventually, he was able to find his way back to the American lines with help from an English-speaking local who had an interesting German-Brooklynese accent. During the Battle of the Bulge, American soldiers were on guard because English-speaking German soldiers wearing American uniforms were infiltrating the American units. When Murray approached American sentries guarding a road, they challenged him with, “Who won the 1943 World Series?” Murray, not being a sports fan, did not know the answer. The suspicious guards escorted him to headquarters to meet the regimental commander. It turned out that the colonel did not recognize him but figured out somehow that the young GI must have been a telling the truth.

At the end of hostilities, Murray returned to the states via Boston Harbor where the fireboats on the waterfront festively shot red, white, and blue water though their nozzles. He called his mom to say he was coming home, jumped on a Greyhound bus and headed to Mississippi to be discharged. After World War II, he followed his pre-war dreams and became a teacher. Murray returned to Europe for the 50th anniversary of the war. On the famous Ludendorff bridge at Remagen, he met with his former enemies, one of which was a German Major, who Murray had shot in the knee during the Battle of the Bulge.

Sergeant Shapiro received his first of two Bronze Stars awarded “for heroic achievement on 16 December 1944, in connection with military operations against the enemy in Belgium. Sergeant Shapiro, after becoming encircled by enemy forces during the powerful Ardennes offensive, calmly organized his six men into an efficient combat unit and safely led them to the Battalion Command post. While he and his men fought a delaying action permitting the command posts to move to better positions, Sergeant Shapiro advanced under intense enemy artillery and small arms fire and completely neutralized a German tank by killing or seriously wounding the 10 occupants. After repelling a vicious enemy attack, he infiltrated the enemy lines again and successfully led his men safely to rejoin units of his organization. The courageous and heroic actions displayed by Sergeant Shapiro reflects great credit on him and the Armed Forces of the United States.”

When asked for advice, he paraphrased President George Washington, “Be prepared for war. It’s the best way to have peace.” He followed that with a simple bit of wisdom, “Enjoy life.”