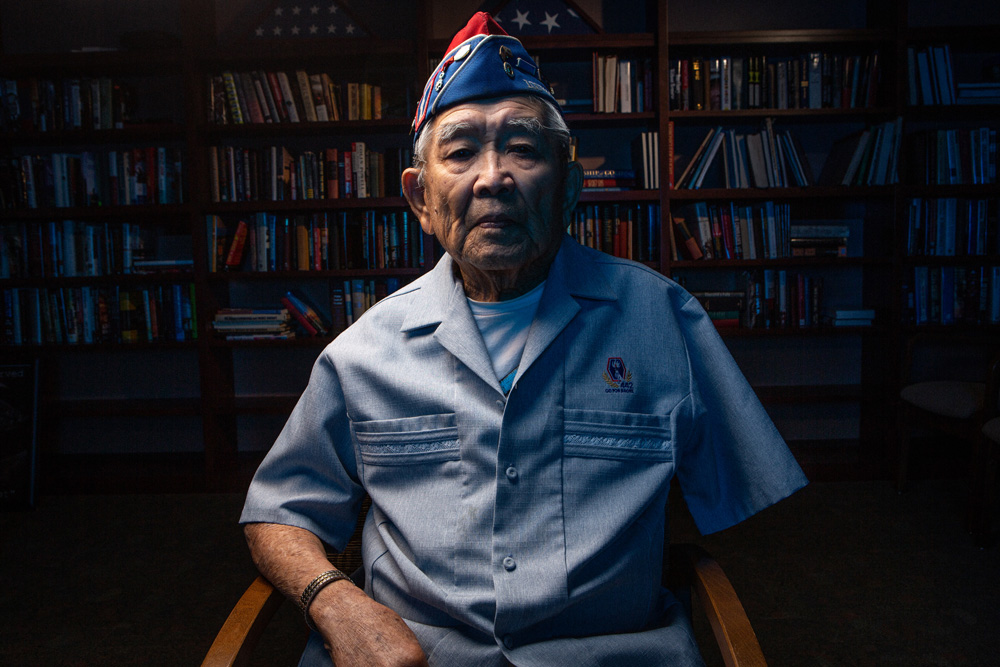 442nd Infantry, We’re the boys of Hawaii Nei
We’re fighting for you, and the red, white, and blue
We’re going to the Front, then back to Honalu-lu-lu
Fighting for Dear Uncle Sam, “Go for Broke,” we don’t give a damn
Let ‘em come, and run, at the point of a gun, for Victory must be won!

These stirring words from the Japanese American 442nd Regimental Combat Team’s fight song are sung with gusto by a man who ironically missed service in the Imperial Japanese Army by a mere three days. Instead, he went on to serve in the United States Army, earning a Bronze Star and Purple Heart as a member of the most decorated American unit of World War II.

Noboru ‘Don’ Seki was born in Honolulu, Hawaii on December 16, 1922. The youngest son of Japanese immigrants, Noboru grew up eating rice and fish during the Great Depression as his parents performed crushing manual labor on the C&H Sugar Company plantations on Oahu. Noboru fished and swam with neighborhood boys in his free time but began working construction at age 16 before graduating from McKinley High School. Noboru’s parents planned to retire to their home in Japan after he completed school, but Noboru refused to return with them. He saw his parents off as they departed for Japan on December 4, 1941. Three days later while reporting to his construction job he saw FBI, CIC agents and military members “running all around” as the Imperial Japanese Navy bombed the port and air facilities in Hawaii.

Unlike the mainland, Hawaii depended upon the hardworking Japanese immigrant families as both workers and employers vital to the Hawaiian economy and social fabric. Noboru, unable to enlist, was able to go to work as a civilian employee of the Army Corps of Engineers. By 1943, the need for wartime manpower became increasingly severe. Noboru was offered the opportunity to serve his country in uniform instead of as a civilian performing military construction. Noboru joined approximately 10,000 other recruits of Japanese ancestry volunteering for service forming the 442nd Regimental Combat Team. The RCT received initial training at Camp Shelby, Mississippi where Private Seki’s most vivid memories are of oppressive heat and humidity, snakes, and the ignored warnings to not “visit the black areas of town.” Trained as a rifleman and infantry scout, Seki was in superb shape when his unit finally arrived at Newport News, Virginia for shipment to the European Theater.

Seki’s first experience in combat was a confused, disorganized night action where his platoon leader was killed, and his Japanese American platoon sergeant took over. Surviving this brutal baptism by fire, Seki understood the RCT Motto “Go for Broke,” and from that day on, went all out for victory. Whether he died or not was no longer important; what became important was doing his duty and helping his country win the war. Combat became so common that its absence fills his memories rather than the violence. The memory that stood out most was not the attack and capture of Florence or Leghorn, Italy or any of the other mountains, towns, and villages through which he battled, but the time in Florence stationed next to a beautiful Italian lake eating canned combat rations. Seki was beside himself with boredom and frustration. With no fishing equipment available, Seki and his comrades improvised and began lobbing grenades into the lake. Collecting the stunned fish as they floated to the surface, Seki and his comrades feasted on the fresh fish their ingenious methods brought them.

Returning to combat duty, Seki was involved in the rescue of the 1st Battalion of the 141st Infantry, isolated and surrounded by superior German forces in the Vosges Mountains of France.  Seki’s 3rd Battalion was ordered to rescue the “Lost Battalion” of Texas National Guard troops, and despite tremendous violence and stiff German resistance, Seki’s unit rescued the Americans, but the cost was high. In the cold, rainy, fog enshrouded mountains, the Japanese Americans fought until the surrounded men were able to break out. Overall, more American troops were killed and injured in this action than were rescued, but nonetheless, it “felt pretty good” to know that his unit had rescued fellow Americans and helped hold the line against the German army. It was in these mountains, a few days later, that a machine gun opened fire, striking Corporal Seki multiple times in his left arm, ending his time in combat, but not his service.

Treatment in a field hospital was immediate, but they were unable to do much more than stop the bleeding and treat him daily with antibiotics. His left arm was amputated at the field hospital before he was evacuated to a huge 5,000 patient hospital in Utah. Mentally, Seki was in shock, wondering how he would be able to fish with only one arm. In Utah, during nine months of convalescence and therapy, he was able to ride horses and fish. At peace with himself, Seki accepted a civil service position that allowed him to travel to Japan as a translator where he was able to reunite with his parents. After several months, he resigned and returned to California where he became a foreman at the Long Beach Navy Yard.

The awards the surviving members of the 442nd received have continued to grow over the years. Awarded the French Legion of Honor and the Congressional Gold Medal, several combat awards have also been upgraded as well so that what in World War II was the most decorated regiment of the U.S. Army now boasts even more awards. Laughingly, Seki stated that if he had gone to Japan with his parents, he would have been drafted into the Japanese Army and been the enemy. But proudly, he was able to live his life “in the greatest country and be a good American” as his parents taught him.