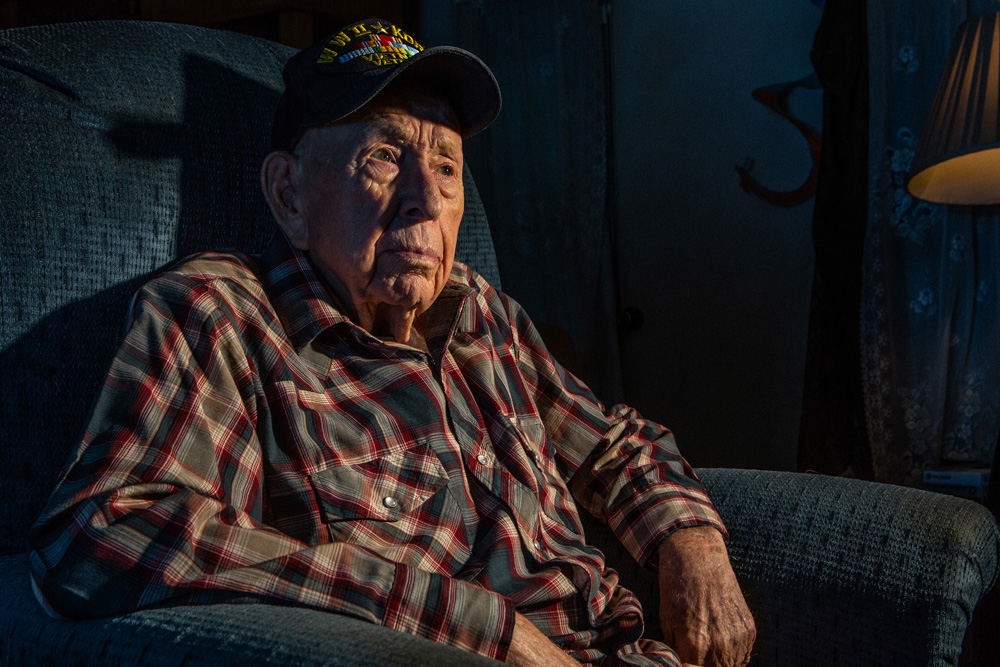 PFC Paul Bottoms grew up in the small town of Newark in north central Arkansas. His father was a farmer, and his mother was a housewife. They made a decent living in a town with a population of 913. For fun, he would play around and swim in the local creek with the neighborhood kids. He spent his teenage years helping his father out on a cotton and corn farm on the outskirts of town where he plowed the fields the old-fashioned way with beasts of burden.  He quit school in the 10th grade. Like many Americans during the Great Depression, Paul suffered some hardships growing up even though Newarkers were accustomed to living without the niceties of life. After quitting school, he continued to work on the farm, but his life was about to change drastically. On the day Pearl Harbor was attacked, he had just returned from the movies when he found his parents on the front porch discussing the fact that Hawaii had been hit by the Japanese. He was sure he was going to be drafted into the Army before long. He attempted to join the Marine Corps but was turned down due to a weak right eye. Though not weak enough for the Army, Paul answered the call to duty after getting his draft notice. He remembered distinctly reading the first line of the draft letter that simply stated, “Greetings and Salutations.”

He reported to Camp Hulen, Texas for basic, which boasted the largest concentration of Army trainees in the U.S. during World War II. There he participated in field operations and anti-aircraft training prior to departing to Fort Dix, New Jersey to join his newly formed outfit. He had been assigned to a mechanized anti-aircraft battalion supporting a 105mm Howitzer unit of the 90th Infantry Division, known as the “Tough ‘Ombres,” based out of Oklahoma and Texas. In April 1944, he shipped over to Europe aboard the Queen Mary, a former luxury liner. Her comfy beds had been replaced by bunks to accommodate the thousands of soldiers destined for the front lines. The journey took him across the Atlantic Ocean from New York to Glasgow, Scotland. They risked the journey of 7 days under the threat of patrolling German U-boats and arrived safely on Scotland’s shores and then traveled down to England and stopped in Okehampton prior to the D-Day invasion.

The first element of the 90th ID went ashore on D-Day on June 6, 1944. Private Bottoms’s mechanized unit arrived in France on June 8 and landed at Utah Beach. On the beach, Paul found a helmet on the ground with a bullet hole through the “TO,” the 90th’s sleeve and helmet insignia, put there by a German sniper. He wondered, “What the hell did I get myself into?”

Reality set in and Paul found himself smack-dab in the middle of the bloodiest war in history. After a few days on the beach, his unit received orders to move out. Paul served on the gun crew of an M3 halftrack variant designed for anti-aircraft support. These open-air vehicles were lightly armored and were unpopular with GIs and were dubbed “Purple Heart Boxes” because they were vulnerable to air-burst shrapnel and machine gun fire. Hill 122 was one of the 90th’s first battles. The hill was high enough that the Germans had a full 360-degree view of the battlefield, and the fighting between American forces and the Wehrmacht was fierce. The 90th took the hill on July 11, but suffered over 5,000 casualties during the battle. The 90th ID went on to have one of the highest American casualty rates of World War II. After fighting and racing across France, the 90th pushed beyond the Saar River, located on the border of Germany, where Paul’s actions proved critical to the division’s advancement into Nazi Germany.

Paul was recognized for his heroism in the face of the enemy in December 1944. In his Bronze Star citation post-dated 8 December 1944, it was noted that in the vicinity of Saar River Operations, an American platoon became pinned down in a pillbox by intense fire from an enemy emplacement.  PFC Bottoms fired his machine gun on the enemy position and silenced their guns. Because of his actions, the trapped unit was able to break out and continue advancing.

On the Western Front, daily life was rigorous and trying on the mind and soul. Paul recalled that his unit was moving up to the front lines one night in complete darkness. They had been up for a few days without sleep. During the movement, his halftrack hit another truck, and the impact knocked off one of their front wheels. He was so tired that he did not even realize that he had been in a wreck. It was a miracle that he had not been hurt during the incident. He remembered that he slept whenever he could, usually with one eye open.

His unit fought on and supported the Battle of the Bulge. They moved up from the south into the Ardennes Forest to meet the Germans head-on. He remembered it being very cold. Scenes from the intense battle still linger in his mind, and he recalled at one point seeing a German tank with its crew dead and all burned up from the burning behemoth.  In one harrowing experience, Paul remembered his unit firing on approaching aircraft. To his dismay, the aircraft were American P-51 reconnaissance planes returning from a survey of the German front lines. Like the wars before it and after it, friendly fire was not uncommon during World War II, and many Americans lost their lives in the “fog” of war. The 90th was 40 miles outside of Prague, Czechoslovakia when they heard that the war was officially over in Europe. Paul and his unit took charge of a railroad yard in Arnstadt, Germany before he got orders to return stateside.

Young Paul Bottoms arrived in Newport News where his unit was fed fine meals during their stay. From there, they were sent to Fort Leonard Wood located in the Missouri Ozarks and were discharged from the Army. After returning home, he worked for Bell Telephone as a pole climber. Paul went on to serve in the U.S. Navy where he spent 17 years as an aircraft engine mechanic. He spent the last 10 years of his working life as a civil servant. He offered the following advice to future generations: “When you get out of high school, join the military. They have a good retirement.”