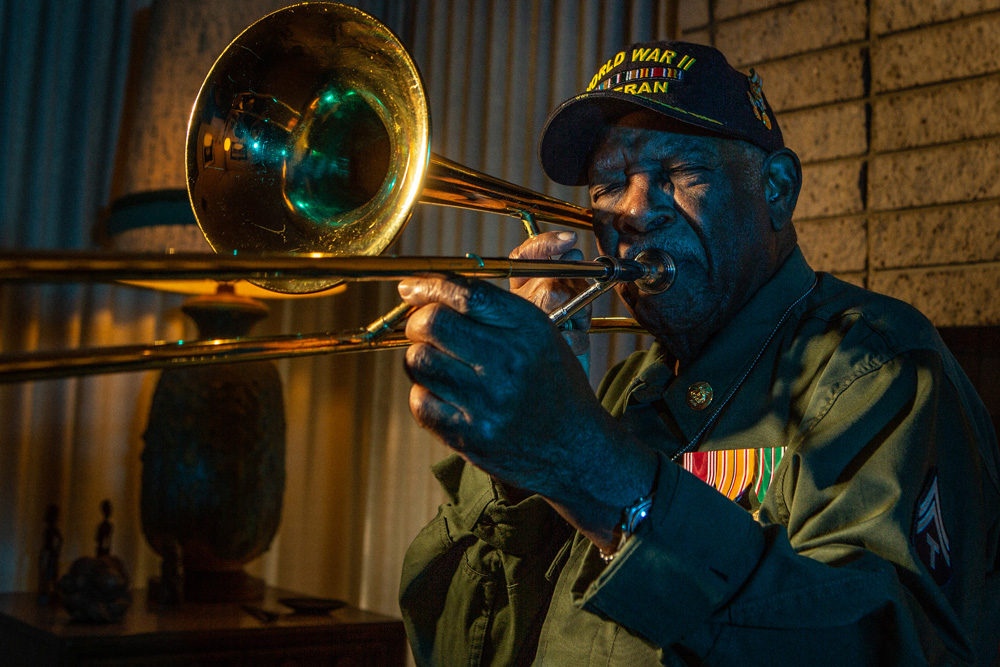 Corporal Ralph B. Sutherland was the first in his family to be born in the U.S.A. His father, Augustus, was from Jamaica and his mother, Maude, was born in the Cayman Islands. His older brothers and sister were all born in Cuba. He was the youngest sibling. The family was close, and he remembered his father saying, “Everything that goes on in the family stays in the family.” The Sutherlands lived in Depression era Los Angeles, California. They did well with his dad owning his own grocery store and his mom running a crew of 23 women manufacturing women’s blouses. His father owned some land in southern California and raised corn, black-eyed peas and tomatoes. At 13, Ralph sold his dad’s corn on the corner of 103rd street and S. Central Ave for 20 cents for a dozen ears. He started playing trombone in the fifth grade and continued to perform through junior high and high school. When the Japanese attacked Pearl Harbor the young musician was going to a movie in the Watts neighborhood. He didn’t realize the significance of the attack until one of his older brothers joined the service. He graduated from high school, and by 19, was joining pickup bands playing jazz and the blues in local speakeasies. He remembers making 51 dollars for a three-night gig. His music was influenced by the likes of Duke Ellington, famous jazz conductor, piano player and bandleader and Count Basie, the big band jazz extraordinaire. Ralph received a note from the draft board and was called in for a physical readiness examination. Three weeks later, he got a letter from the war department instructing him to report to Fort MacArthur in San Pedro.

The 19-year-old recruit reported to Fort MacArthur and was issued his uniforms and then shipped out a week later. He was sent to Camp Ellis, Illinois, for basic training. While there, he was interviewed by the base staff who took interest in his musical abilities. After playing the Washington Post and Stars and Stripes Forever for an evaluating officer, he was selected to play in 1332nd Engineers band. He continued combat training like the rest of the soldiers for three months, not only enduring the rigors of Army life but also the racial prejudice that went along with being black in a segregated army. It was not until President Harry Truman signed executive order 9981 in 1948 that racial discrimination was abolished in the Army. After the band was formed at Camp Ellis, the musical group was tasked with producing a full show in 6 weeks. They quickly developed a variety show with big-band jazz, singing, and comedy themed “From Bach to Boogie” that ran over 3 hours. Some of the band members, known as the Sad Sacks, sang Over the Rainbow while Ralph sang the blues. They opened up the show with Count Basie’s One O’clock Jump, a real foot-tapper.

Ralph and the men of the 1332nd Engineers Band arrived at Camp Kilmer, New Jersey, a staging area for troops destined for Europe. His band played on the dock while the soldiers marched onto the ship. The officer in charge marched the band up the gangplank, and they played until the ship pulled up anchor and started to head out to sea. After 7 days, they arrived in Birmingham, England and quickly got settled in. One of their first shows was for the 6888th Central Postal Directory Battalion, the only all-black WAC unit that served overseas during World War II. His band continued to play at Stanton and just about everywhere there were U.S. troops in England. They played in hospitals before wounded GIs and for soldiers on R&R from the front lines. Ralph, like many of the Army musicians, played multiple instruments. For Ralph, it was the trombone and baritone horn. In England, the tight-knit band played for many GIs who were in bad shape, and they unfortunately lost one band member who drowned while swimming too far off a beach in southern England.

After performing for 8 months in England, the band sailed west across the Atlantic, through the Panama Canal, and up to the Philippines. Ralph distinctly remembers one engagement where they played at Luzon stadium after a screening of Humphrey Bogart’s The Big Sleep. They were stationed at San Fernando La Union about 8 miles out of Manila and took buses and jitneys into town from time to time to have their uniforms pressed by local women. At that time after the war, the U.S. military was giving honorable discharges for 24 months of service. After 8 months in the Philippines, he met the required 24 months of service. Ralph was ready to come home. He returned from the Philippines on the May 1, 1946 and reported to Camp Beale, California where he was honorably discharged. He turned in his uniforms and M1 carbine but took home his valve and slide trombones.

Arriving back home, he went straight to Mile High and Franks restaurants for a hamburger, hot dog, and a malt. After that, he returned to his family’s neighborhood and surprised his folks with his unannounced return from overseas. Returning to civilian life, Ralph went back to what he was good at—playing trombone in jazz bands. He played at the renowned “Slim Jenkins Supper Club” in Oakland, California and other jazz joints in the state up until 1948. By then, he had figured that the “band life” was not for him. He put his horn down and never looked back. He was married in 1952 and worked as an apprentice butcher before he got into painting and decorating for Los Angeles County. He eventually started his own income tax service which he ran for 66 years.

Corporal Ralph Bird Sutherland entertained wounded and homesick soldiers in both the European and Pacific theaters during World War II. His wonderful music and comedy acts brought joy and improved morale for men fighting for liberty from fascism and imperialism on bloody battlegrounds around the world. His bravery did not manifest itself on the battlefield but back at home in the U.S. living through segregation and the Civil Rights movement. Ralph took his hat off to those who fought for the Civil Rights movement and turned things around for African Americans in the U.S. Perhaps based on his experiences with segregation and discrimination, he offered future generations the following advice, “Learn to love everybody.”