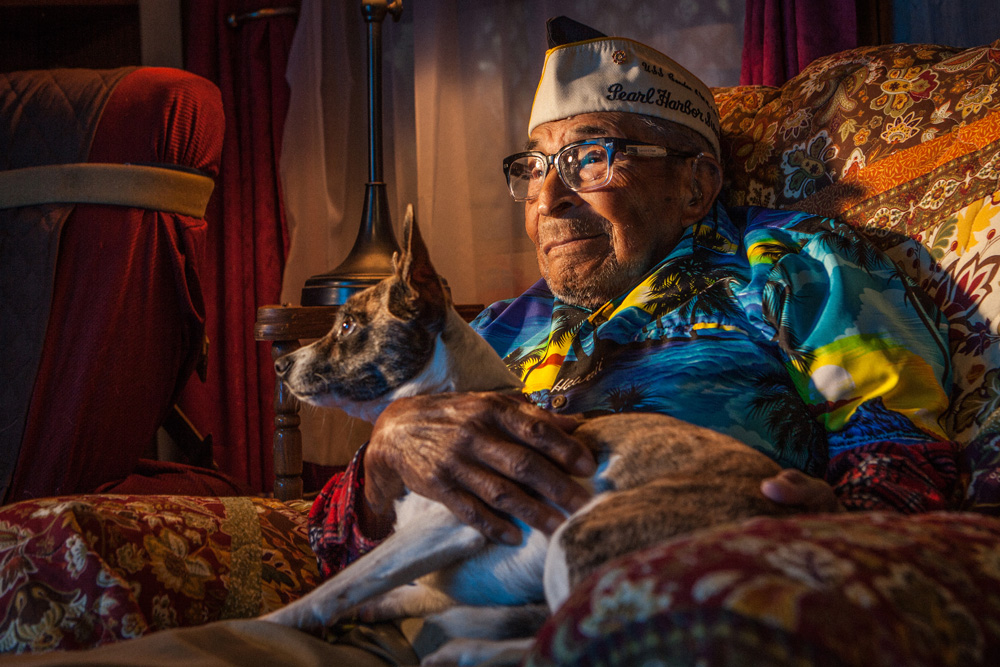 Ray Chavez stood ready to serve should he be activated as a Naval reservist. “I doubt they’ll call me…but I’m ready to go if they do!” he declared. At 106, as the oldest living survivor of Pearl Harbor he frequently participated in commemoration ceremonies and parades. Mr. Chavez joined the Naval reserves during the Great Depression because his family needed his pay to survive.

He recalled the hardships of his fellow San Diegan farmers, many of whom were forced to abandon their land and leave their animals to starve. Ray had quit school in his junior year and took whatever odd jobs he could to bring in money. But as a Hispanic in an era of segregation, it was sometimes difficult to find work. The Navy meant a predictable paycheck.

He was trained as a minesweeper and stationed aboard the USS Condor, a converted fishing boat whose wooden construction was preferred because unlike her steel counterparts she would not trigger the magnetic naval mines.

Ray worked the midnight to 0600 shift when they were at sea. On December 7, 1941, they were on routine patrol in the waters outside of Pearl Harbor. All was quiet with no indication of what was to come.

At 0345, Ray was at the helm, sweeping for mines, when the Quartermaster called out to the Officer of the Day, “Mr. McCloy, we got company here.” The Quartermaster had spotted the periscope of a small submarine attempting to enter Pearl Harbor. McCloy immediately messaged the ship’s captain, who ordered them to signal the Commandant of the 14th Naval District aboard the destroyer USS Ward.

At first the Ward’s officer couldn’t find the sub and didn’t believe Chavez and his shipmates. But at dawn a PBY aircraft spotted the midget submarine and radioed its coordinates to the Ward, which sank it.

Today the USS Ward is credited with firing the first American shots of World War II. Then all Chavez and his shipmates knew was that a sub that clearly was one of the enemy’s was trying to make its way into Pearl Harbor. “We knew the sub wasn’t ours because ours weren’t supposed to be there. If one was there, it was considered an enemy… The submarine’s crew couldn’t answer the challenge questions put to it by the Ward,” remembered Mr. Chavez.

A second Japanese mini-submarine made it inside the harbor but was quickly sunk by the harbor patrol. Ray finished his patrol as usual at 0600. Dead tired, he headed to his nearby home in naval housing, extremely exhausted, he told his wife he didn’t want breakfast and went to sleep. “It seemed as if I had been asleep for about five minutes, and she came in yelling, ‘We are being attacked! Wake up! Get up!’”

At 0800, his wife had awoken Ray to tell him the harbor was being attacked. The dense black smoke, which they could see from their home, obscured the view across the harbor. He told his wife to get ready to evacuate. She and their young daughter were given 15 minutes notice and were allowed to take only what they wore and a purse. The Navy took them first to the YMCA in Honolulu but the next day were told the Japanese were bombing Honolulu, so they were relocated to Schofield Barracks in the mountains. Two weeks later, they were evacuated to the U.S.

On December 7th, though, Ray was half-asleep when his wife came screaming and didn’t believe her. He just wanted to go back to bed. She convinced him to get up and look out the door. As they were both looking towards the harbor, a very low flying torpedo-bomber flew by. They looked at the pilot and he looked at them. Then Ray got dressed and a friend picked him up by car and drove to the Condor.

As he left his home, a Japanese plane carrying a torpedo below the fuselage flew directly over him, so close that he and the pilot made eye contact. Ray knew the pilot had readied the torpedo to target a ship in the harbor.

The Condor was small enough to be able to race out of Pearl Harbor to undertake an immediate mine-sweeping mission during the attack. Mr. Chavez remembered they were never really in danger because the Japanese Zeros were focused on U.S. ships inside the harbor.

While searching for mines, a destroyer cut across the Condor’s stern and tore up her mine-sweeping equipment. She was ordered back to Pearl Harbor for repairs once it was safe. As they entered the harbor later on December 7th, “everything was still on fire,” Chavez recalled. “It was horrible. There were men jumping from listing ships trying to save themselves by jumping into the water. The water was covered in oil that caught fire. Men burned to death… We weren’t allowed to pick up survivors because the Condor was too small.”

Because his family had been evacuated to California, Mr. Chavez sought and received a transfer to the troop transport USS La Salle, which picked up troops all along the west coast and took them to various locations in the Pacific theater, such as Guadalcanal and New Caledonia in the South Pacific. Ray served out the rest of the war on the La Salle, participating in convoys of all sizes.

They often picked up combat casualties who were treated on board, sometimes overflowing the 15-bed hospital. “There were so many wounded we put them in passageways and on deck…It was hard to see the men all torn up. I tried to visit them, especially the Hispanic ones. I’d see them in the morning all healthy and clean. They’d come back later that day all torn up. That was hard.”

Ray and his shipmates first got word of the war’s end while they were at sea on their way back to the U.S. West coast to pick up troop reinforcements. They couldn’t believe it. “We looked at each other and didn’t say a word. We waited to celebrate until we got official word that it was over,” he remembered. They were ordered to San Pedro, California. No one was there to say, Welcome home!”

“I used to shake like a leaf after being through so many battles,” Chavez reflected. “I had to take a physical before I was discharged. The doctor wanted to send me to a naval mental hospital, what he said was the best hospital in the Navy for combat fatigue. I said, ‘I’m fine, I don’t want to go,’” Chavez recounted.

Ray knew he wouldn’t be able to get a job after the war if future employers looked at his records and saw that he had been in a mental hospital. He returned home and stayed with relatives for a couple of years until he “got over it.” “Took me about three years to get over it. During battle, you don’t sleep, you don’t eat. At night, you’re still awake, but here I am!”

Chavez paused, as he reflected on his service in the Navy. “I’d do it again. I like the Navy,” Mr. Chavez concluded.