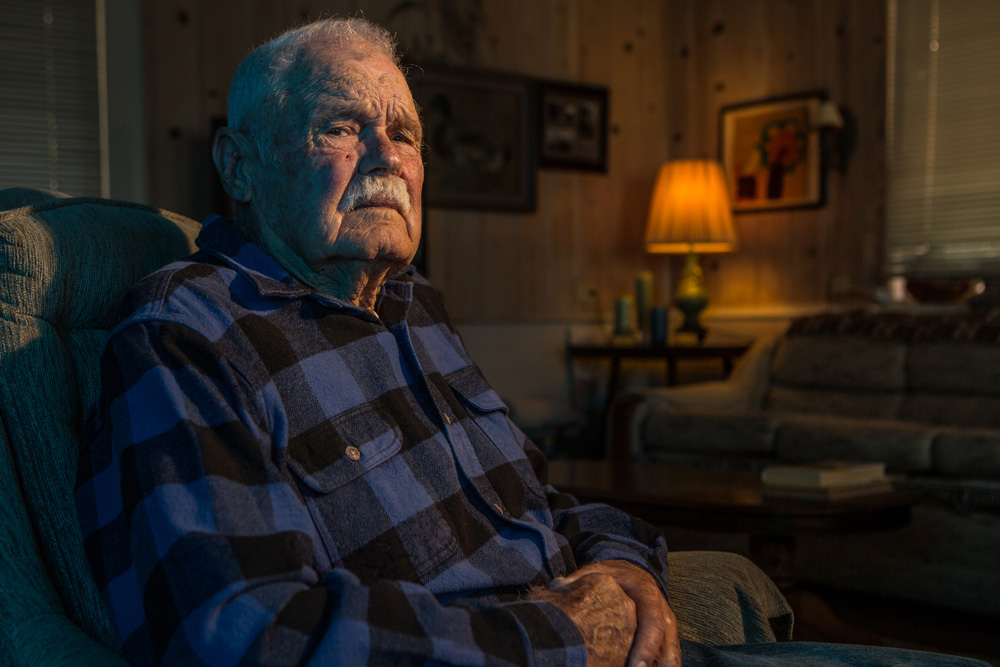 Seventy years after the war, Richard Chase was awarded a Bronze Star. “I’m not a hero,” he said quickly. “I’m just another 90-year-old GI.”

He’s prouder of his Combat Infantry Badge he received in Europe near the war’s end. As a recon scout with the 97th Infantry Division, Mr. Chase had fought his way through Belgium into Germany. He survived the Battle of the Bulge and witnessed thousands of German soldiers surrendering afterward. “All of a sudden all you see is all these Germans coming with their hands over the top of their heads,” he recalled. Richard’s unit was sent to Czechoslovakia where they engaged German troops in combat in Prague and finally in Pilsner, which is where he was when VE Day was declared.

His team of three men would go on patrol for 24 hours, return, and the next team would go out. They were assigned with a tank unit “right on the infantry’s tails, when they needed fire support we were there,” Richard explained. “Wherever the infantry went, the tanks went… They were M7 tanks—four of them in my unit.”

Sleeping in foxholes was a regular occurrence. Chase and his team would bury themselves to blend into the terrain. They had no camouflage like soldiers today. “Twice we went behind enemy lines… We screwed up, read the compass wrong. We realized when the sun came up where we were. Talk about digging foxholes! We put brush over us and hoped to hell they didn’t run over us. The Germans were close. We dug in and waited until they disappeared the next day. I was thinking, ‘There it is. Your luck’s run out.’”

But it wasn’t always so fraught with danger. “The biggest party we ever had—we had in Czechoslovakia. I don’t know how any of us survived. We drank— the whole outfit passed out—wine, vodka, beer, champagne, enough to kill a guy!” he laughed.

When the war in the European Theater ended, Chase was shipped to South Carolina, put on a train to Ft. Lewis, WA, and then ordered aboard a ship to Japan by way of the Philippines. It’s not what Richard had in mind; he figured he’d get to go home once the war in Europe ended.

Shortly before his ship reached the Philippines, the atomic bombs were dropped on Japan, ending the war there. Mr. Chase spent several months in Japan, digging enormous holes with a bulldozer to bury trash and dismantling Japanese planes. When that assignment ended, he was shipped to the U.S., discharged, and given a Greyhound bus ticket to San Diego. But he hitchhiked down the California coast, figuring it would be faster, a decision he regretted once he realized he likely would have been home sooner had he taken the bus.

Once back in his hometown of San Diego, Richard returned to the job he’d had before the war, milking cows at a family-owned dairy. He easily re-adjusted to civilian life as he settled into a familiar routine.

When he reflected on his wartime service, he explained, “You’re drafted in the Army to do one thing—go over there and fight…to get rid of Hitler and free the country. And that’s what we did. We whipped his butt.”

“It’s an experience I’ll never forget,” he continued. “I let a lot of piddling little things go that didn’t mean a damn thing after seeing what was going on over there.”

Chase never thought he’d be in the war. He was in his junior year of high school, getting up at 3:30 a.m. to milk cows before school and spending his evenings after school milking them again before he was drafted. He simply hadn’t had time to think about what the draft could mean for him. Once drafted, he remembered thinking, “Hey, that’s just the way it is.” You did what you had to.

He wasn’t officially trained as a reconnaissance scout, but picked it up after deploying to Europe. “You’d get out the binoculars and look to see if there were any pretty girls or German Nazis,” he joked.

Then he turned serious as he considered what kind of country we’d be living in if we hadn’t won that war. “I don’t know,” he said. “I really don’t know. You were just happy it turned out the way it did.”

And he had a little advice for current and future generations: “Seems like today everybody’s got problems and can’t sit down to talk about them. Use a little common sense and talk about things; then we’d get along a little better. It’s not just me, me, me, me; it’s us, us, us. It’s a tough apple to bite, but that’s the way it is.” Wise words from a man who had been married nearly 70 years.