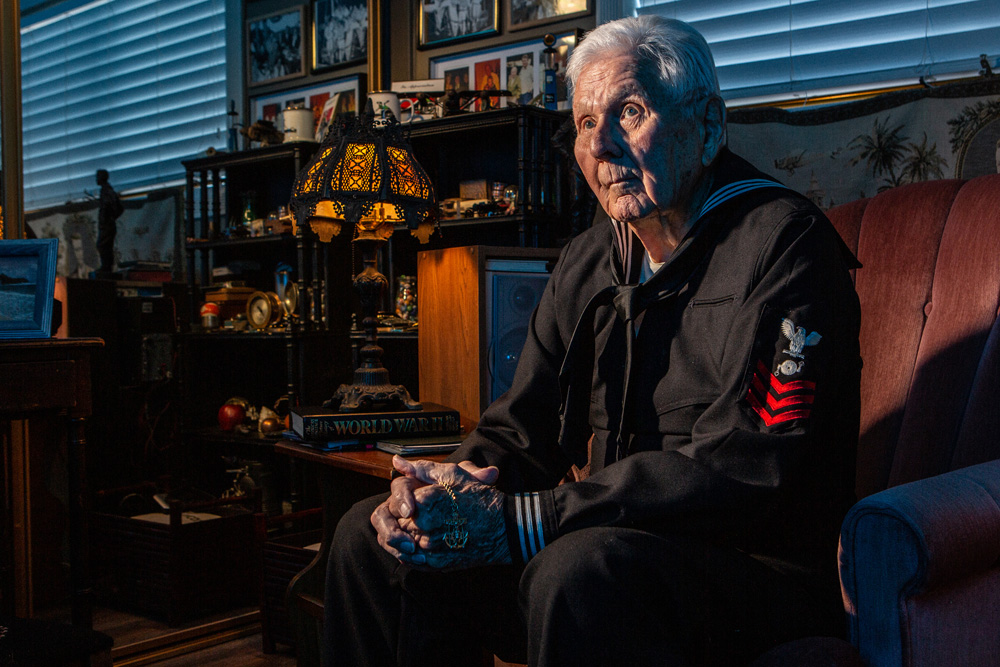 Petty Officer 2nd Class Robert Blackmore traces his ancestry back to the city of Galway, on the west coast of Ireland. The family migrated to the US through Ellis Island and settled in Montana and eventually planted roots in California. He grew up the oldest in a family of six kids in East LA. He recalls that the family was unbelievably close. His father was known as a good “hustler”, and a “jitney man”, driving cabs in LA to put food on the table. Breaking his wrist, he was unable to drive his taxi anymore and found a gig delivering box lunches to factory workers in the industrial district. At 13, Robert spent his summers with his father on his deliveries at the local manufacturing plants where he sold lunches to truck drivers. He made 25 cents an hour playing “Parade of the Wooden Soldiers” on piano for kids learning how to tap dance. At 15, he swept the hallway of the All-Girls Catholic school, Saint Mary’s Academy. Robert recalls working on his Ford coupe at the Walter Myers Texaco gas station when a stranger walked up and told him that Pearl Harbor had been bombed by the Japanese. Quizzically he asked, “Where is Pearl Harbor?” He attended Mount Carmel Catholic high school until his senior year when he dropped out to join the Navy. He didn’t know anything about boats but his daily jaunts to bodysurf on the California beaches engrained his love for the sea. So, the Navy it was.

At the Navy training base in San Diego, the young seaman recruit learned the ropes and, after eight weeks, graduated as a seaman apprentice. He bounced around the west coast; first, at North Island Naval Amphibious base, Coronado, and learned how to pilot landing craft. Completing training at North Island, he was sent up to San Francisco to wait for an assignment. There he was issued a sheepskin jacket and a furry hat in anticipation of supporting the Battle of the Aleutian Islands at Attu.

With orders changed, cold weather clothing turned back in, Robert sailed to New Caledonia from Port Hueneme on July 3, 1943. There he joined the crew of the attack transport, John Penn (APA-23), bound for Guadalcanal. The John Penn sailed to Guadalcanal in August to deliver much needed supplies to the island. The young sailor stepped foot onto the beaches and supported the unloading of artillery shells needed by the brave marines. On the beach, he witnessed the sinking of the John Penn as it slipped stern-first offshore after being struck by a torpedo from a Japanese Nakajima B5N2 Kate. The torpedoed ship slipped to her final resting place with 98 men killed or missing and many others seriously wounded. Three days later he boarded an LST and headed for the invasion of Vella Lavella. There, he faced bombing and strafing from Japanese Zeros. While ashore, his LST was bombed and sunk offshore, with one sailor killed. Stuck on the island, he joined two young marines in their foxholes. He was told, “If you come out before daylight, you’ll be dead by morning.”

Robert remembers the PT-109, Lieutenant Junior Grade Jack Kennedy’s boat, was not far from Vella Lavella when she collided with the Japanese Destroyer Amagiri. Life on Vella Lavella was tough, sleeping in foxholes and bearing the buzz of “Washing Machine Charlie”, a Japanese bomber that would fly over at night to demoralize the sailors and marines on the island, dropping a single bomb every morning. Seaman 1st Class Blackmore began working with a Chief Shipfitter, who promised Robert the rank of Petty Officer 3rd Class in 2 months if he helped fix damaged landing craft. The two sailors were creative and built a dry dock out of an abandoned Model T and coconut logs to pull the boats out of the water for repairs. Times were eventful for the young sailor. He tells the story of how he rescued the Marine Ace and Medal of Honor recipient, Ken Walsh after the pilot landed his wounded F-4U Corsair in the water. Colonel Walsh went on to be one of the top American Aces of the war with 21 enemy planes shot down. 50 years later Robert and Ken became friends. Robert took his first plane ride in a DC-3 down to the New Hebrides where he got assigned to the USS Dixie, a destroyer tender.

The crew of the Dixie had not been on liberty in three years. Robert remembers that the word came out that the ship was bound for Australia for some much-needed R&R. The Dixie and her crew never made it to the ‘land down under’. At that time, the Navy was fighting Japanese forces at the Battle of the Marianas, known as the “Turkey Shoot” where the American fleet and her carrier-based fighter and bombers decimated the Japanese forces, destroying more than 600 planes. Robert returned to the States after the battle and was on leave in San Diego when it was announced that the US had dropped the atomic bombs. After taking leave he spent eight weeks at underwater welding school, learning how to repair ships using arc and acetylene torches. Ironically, he was discharged two days later. He later went on to own a successful catering business and a paper products company. He fondly remembers the sign on the front of his house that read, “This place is a zoo.” Rightly so, The Blackmores had unusual house guests; two chimps lived in a bedroom, two otters made their home in the swimming pool and a kangaroo and wallaby lived on the side of the house.

Petty officer 2nd Class Robert Blackmore served his country with honor in the dangerous South Pacific during WWII. He recalls that the 25 months he spent on the islands of the Pacific and aboard ship, was a big adventure and the best years of his life. His advice for future generations is simple, “What we have to be prepared for is the other side.”