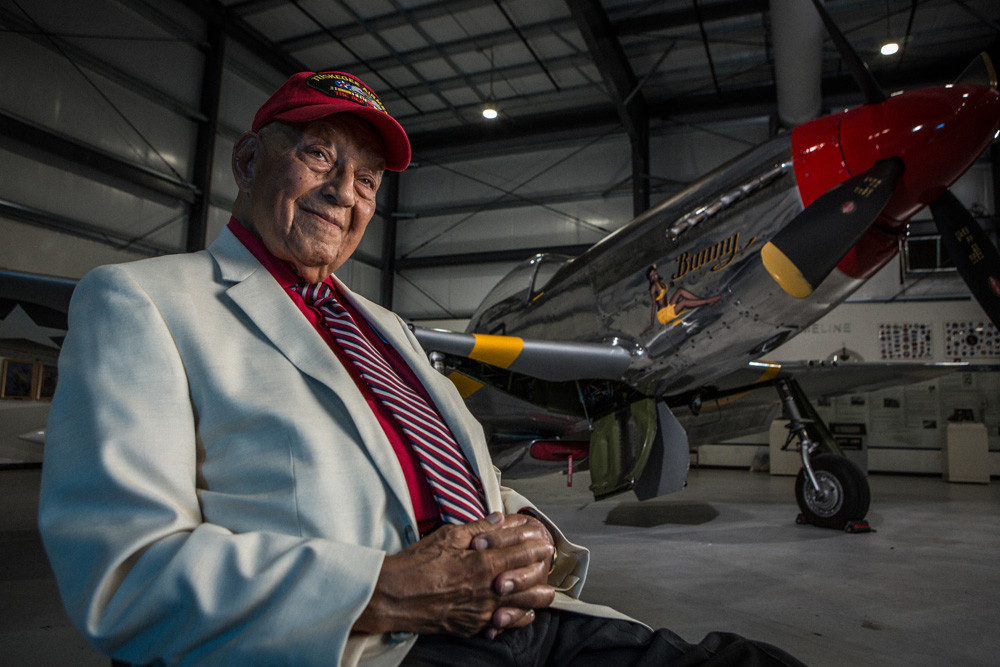 Flying low along the Danube River, Lieutenant Colonel Robert Friend had an oil laden river barge in his gunsights. Depressing the trigger, he fired a stream of .50 caliber bullets streaking from his aircraft’s guns into his target. Another aircraft was slightly ahead and above when the barge suddenly erupted into a massive fireball of flames and smoke. Friend could see shrapnel blasting into the lead aircraft as he maneuvered to avoid the violently expanding fire. Unable to completely avoid the blast, Friend flew through it. Recounting the event years later, thinking of the comrades he lost and the war itself, he paused seriously before intoning “like flying through hell.”

Robert Jones Friend was born in Columbia, South Carolina where his father was stationed at Fort Jackson, but when he left the Army, his Spanish immigrant father settled in the Bronx, where young Robert lived from the age of four until joining the Army Air Corps. Robert knew from an early age he wanted a career in aviation and while in high school, he pursued an aeromechanics curriculum where he learned maintenance and repair of Liberty engines and fabric body repair. While his father pursued an unsteady career in commercial art, Robert’s family occasionally required “relief,” and young Robert worked as a deliveryman for clothiers in New York City until college when he first attended Howard University in Washington, D.C. and then Lincoln College in Pennsylvania. Somewhere along the way, Robert found the time to earn a private pilot’s license from an air school in New Jersey, and when Pearl Harbor was attacked, Robert immediately went to sign up for aviation. Being a minority there was only one opportunity for Friend to fly, and that was in the segregated unit that became known as “The Tuskegee Airmen.”

Training at Moton Field was rigorous, and many cadets failed to graduate. Friend was a graduate of one of the early flight classes and watched as the organization grew from the initial five pilot graduates to its final size by the end of World War II, with virtually every member starting from the bottom. The commander was a West Point class of 1936 graduate who had been a career infantry officer. Initially, the command consisted of him and four officers who had graduated flight training in the first class. These original officers ascended in rank as the training establishment was taken over, then first squadron and then another were added until there was both a bomber group and a fighter group of mostly African-American airmen with all command, flight, maintenance, and support positions filled by minorities.

After training was completed at Moton Field, Friend and his fellow pilots continued tactical training awaiting their overseas orders, which found Robert assigned to the 332nd Fighter Group known as the “Red Tails” due to the color code of their aircraft.

Arriving in Italy, Friend immediately began double duty as the Assistant Operations Officer and as one of the fighter pilots of the 301st Fighter Squadron as they conducted ground attack missions, sea patrols, and fighter sweeps throughout Southern Italy and the surrounding seas. Later, as the American foothold on Italy expanded, the Red Tails switched to escorting bombers as they flew missions to bomb the Romanian oil fields and any productive areas of occupied Europe within reach, including Berlin in the weeks before the German surrender. Friend flew 142 missions in World War II since he volunteered to “fly until there was no more war.”

Friend readily recounted incidents that occurred during the war, often accompanied by laughter as he finds the feats and bravado of the young pilots hilariously entertaining. One incident he laughingly recalled involved his aircraft being forced down along the front lines of Italy. Isolated, surrounded, and unsure which direction to travel for safety, the newly ground-pounding Friend was discovered by a group of Italian partisans. With a full belly laugh, Friend believed he owed his life to the color of his skin since one partisan—an Italian woman with a huge knife eyed him with evil intent—but luckily, they soon realized he was not a German pilot and returned him to allied lines.

On a more serious note, Friend recalled that on one occasion an American bomber was forced to land at the isolated base the 332nd occupied. The bomber crews wandered around asking for the officers until realizing that they were speaking to the officers and pilots. After several days, the weather cleared, and Friend recounts that one pilot in particular who “moved in” with Friend, and whom he had long conversations, mentioned that during his stay with the 332nd he had learned one thing that would leave an everlasting impression: “you have better cooks.” Friend was unsure how to take this, but on reflection, he believed it was because this pilot saw the 332nd as American airmen as accomplished and professional as any others, and not noting the difference in color indicated that this pilot saw them as completely equal – with the exception of their mess services!

After the war, Friend remained within the Air Force and ultimately retired having served in World War II and during the Korean and Vietnam eras. Friend’s comments on the war and on personal awards reflected his own perception of himself as neither a hero or a trailblazer. Accomplishments and individual awards require “a lot of people to do right,” and if he was a hero, then “so were all the others.”