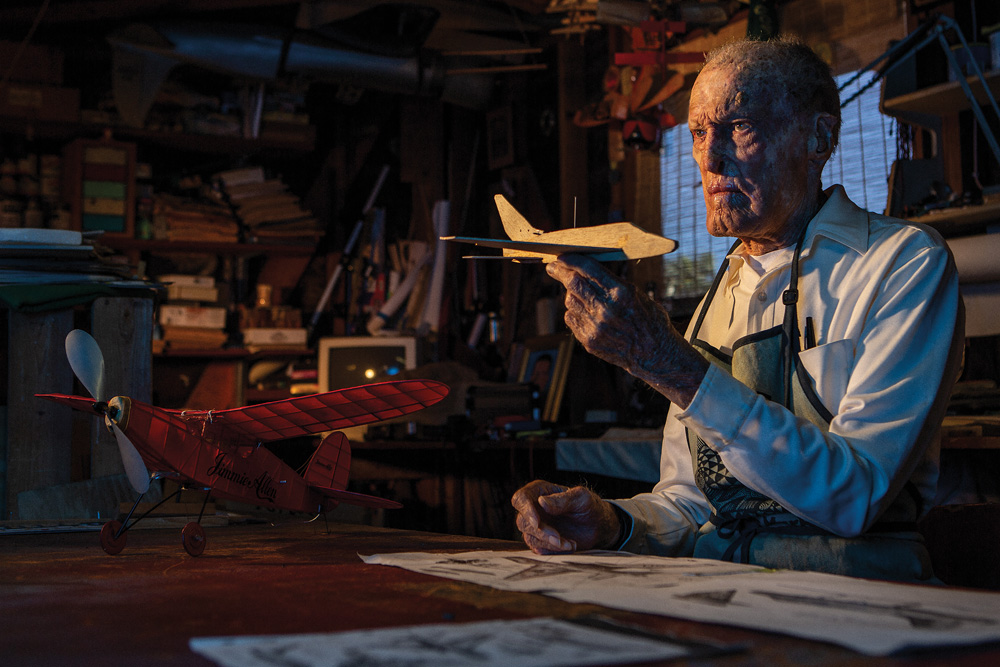 Robert Thacker grew up in El Centro, California, and was determined to find something better. At 19, he requested pilot training from both Army and Navy. The Army Air Corps got him first. He enlisted in the summer of 1937 and had to wait two years to begin training.

“The Air Force before World War II was a gentleman’s flying club, period. We didn’t have any crews; we just flew airplanes.” He paused. “We had no idea what was going to happen at Pearl Harbor.”

He attended basic training at Randolph Field, Texas. His training lasted a year. “In those days, you listened to your flying wires to gauge what your airspeed was.”

“The commercial airlines love our pilots; they get so much training—1,200 hours. We can’t keep pilots in the Air Force nowadays,” he said.

Thacker recalled the difficulties of supplying such items as oxygen masks for B-17 pilots in New Guinea and how without the masks in low pressure situations they were defenseless, allowing the Japanese to do whatever they pleased.

In December 1941, Thacker was at Salt Lake City. “I was 23 years old, and I was a hot pilot. Blazing hot! But how many brains did you think I had at the time of Pearl Harbor? Not many!” he laughed.

Thacker was ordered to grab his navigator, head to Seattle, and fly a B-17 to the Philippines via Hickam Field, Hawaii, one of twelve ordered to do so. He’d never flown one—never so much as sat in one—and thought his boss was out of his mind. But his boss repeated his order, and away Thacker went.

Approaching Hickam Field, after multiple attempts, they were unable to get an answer from the tower, they flew along the waterfront looking for the correct place to land. They saw black smoke in the distance, and thought it was farmers burning their cane fields.

Suddenly, bang! Bang! Bang! “What the hell’s going on?” asked Thacker. The radio crackled to life, the air-traffic controller told them they were number two to land and reporting they were under fire by Japanese airplanes. “What?” Thacker exclaimed.

“They were just as surprised as we would be if a nuclear weapon hit this house right now. What do you do? Where do you go? What takes over is survival. Hickam and the commercial airport were right together in those days. Between the two, there was this scrub growth. I took my crew, and we went into the scrub growth.”

“That was the smartest decision I ever made in my life. Because about 15 minutes, here come about thirteen horizontal, straight and level Japanese bombers. And they wiped out that airfield.”

He described how they were nearly defenseless. “There was nowhere to go to fight a war. They sank every ship in the harbor. They sank the floating dry dock in the harbor. That’s mass destruction. You could see those torpedo bombers drop below the trees, then climb up and right behind them was this tremendous column of torpedo explosion.”

Although Thacker’s plane itself initially wasn’t under fire, he knew from his training he had to get his plane on the ground as soon as he could. “I came in and landed crosswind. Three Zeros shot me up pretty bad on the final approach. They shot my right gear out. So, I landed successfully, grounded the airplane on the end of the runway. It’s a good thing I was stopped, because I would have taxied out and sat there just long enough to get me and my crew killed by those bombers,” he said.

Neither his plane nor the others were equipped for combat yet because they were under secret orders, en route to Clark airfield in the Philippines. Thacker recalled he heard the confusion had been rampant at Clark, which was four hours behind. “People were saying, what do you mean, an attack?”

After landing his B-17 at Hickam, he and his navigator took cover. “We were just sitting ducks. We were as defenseless as we are sitting right here,” he recalled.

“We had eleven, brand new B-17s, and the Navy had some PBYs that weren’t knocked out at Ford Island. It was an air war; it wasn’t a Navy war. First, the bombers came in; then the fighters came and strafed. All of the Japanese pilots were briefed on certain set targets, so that’s what they hit. Oil refineries and oil storages were not on the list,” he said.

“Some of our pilots were in P-40s, which could only go half as high as the Zeros,” he remembered. “So, if you’re taking on somebody who can go twice as high and twice the speed as your airplane, who do you think is going to win? The other guy.”

Three or four months into the war, Bob had made a bombing run. His navigator said, “I think we’re in for a rough ride home.”

“Yes,” Thacker recalled. “I could see five Zeros lined up. They were looking at me! I was the only one airborne that morning. Due to good luck and clear thinking, we survived with these Zeros making circles around my B-17 while I’m pulling everything but my front teeth.

“When you see those two blinding tracers come out of those wing guns and they’re aiming right at you, and you don’t have the firepower, if he hit you it would blow you in half. I escaped. I only got one man wounded; he was supposed to be the ball turret gunner. He started to lose consciousness and had a hole in his head the size of a silver dollar. We got him to a good hospital. After flying 17 hours that day, we hit the target, so they very graciously gave me a Silver Star.”

“On one of my routine recce missions, I was at about 22,000 feet. I saw this activity, and in about five minutes I picked up some anti-aircraft fire. I was pretty sure they didn’t know I was in a B-17 and a Yank onboard. I said, ‘If that son-of-a-bitch is shooting at me, I’m gonna bomb him,’ so I took a run on that bastard.”

“So, we did. I made sure all the buttons were in the right place. I wanted a 30-second bomb interval. I was carrying one bomb bay full of fuel. The other bomb bay on the other side was carrying four 1,000-pound bombs. Any one of those bombs would have blown that weapons system right in two,” he recounted.

When he returned to base, a staff car followed him. “Who jumps out but a Brigadier General and a full Colonel. And the General said, ‘Lieutenant, you just missed the ​USS Chicago​! You were two short and two over.’”

Thacker paused. “Was I lucky not to have bombed the ​Chicago, ​because in those days nobody knew anything. The Navy wouldn’t give you the time of day.”

By November 1942 Thacker’s unit was hearing rumors they were going to go home, after a year of combat. By then, he had flown 48 sorties. “We flew 800 miles to sea on a Y search, out and back. We were doing this as a crew about every three days.”

After rotating back to the U.S., he grew restless and decided he wanted to go where the yelling was the loudest—the European theater. He got himself scheduled to participate in the original D-Day invasion date of June 5.

“I did fly on the 5th. The weather was stinking bad so the invasion was postponed until the 6th. But you could practically walk on all the boats across the Channel. I’ve never seen so many boats in my life. I didn’t fly on the 6th, which threw my war stories all out of kilter!” he laughed.

“I led a lot of planes, depending on the mission. Sometimes as many as 2,300 bombers. I was without question the most experienced B-17 leader in both theaters,” Thacker said. “And I was 26 years old.”

During his thirty-one years in the military, Thacker had many adventures, including a time when he commanded Chuck Yeager and grounded him for a week for disobeying a directive.

His advice for future generations is to live life following the Ten Commandments. “If you follow them, you’ve got a real great basic way of life; it would be a much better world.”

Colonel Thacker and his wife, Betty Jo, adopted a daughter 11 years after they were married. Their marriage lasted seventy-one years until Betty Jo passed away. “My precious wife,” Bob called her.