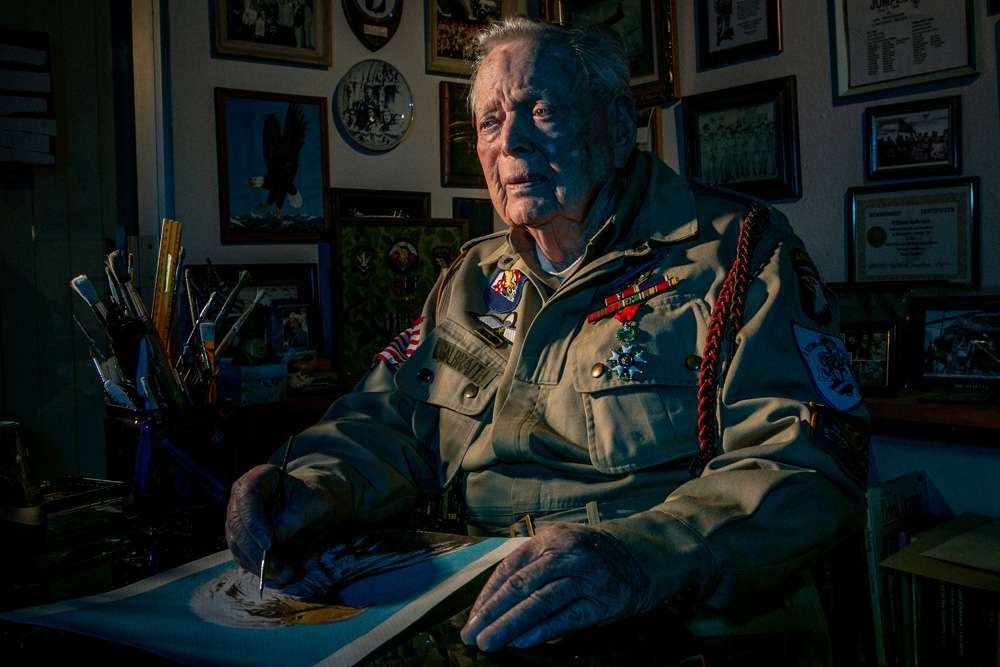 William P. Galbraith grew up hiking to the falls and swimming in the pools of Eaton Canyon behind Mount Wilson, north of Los Angeles. He was the only child of Cecil “Shorty” Galbraith, a truck driver and his mother, Bernice, who was an RN and a chemist. His parents split up when he was 9, so he went to live with his mother in Long Beach. Though the Depression was hard on many Americans, his family did well. His father was never out of work, and his mother provided at-home medical care for others. He attended Hamilton Junior High School and sketched pastel drawings of ships of the War of 1812 and sold them to his teachers for 5 dollars apiece. His first job was at Ralph’s grocery store, delivering groceries to people’s cars. His fondest memories of growing up, center around working for the U.S. Forest Service, blowing up rocks with dynamite and widening trails in the San Gabriel forest. Right after December 7, 1941 he remembers sitting at his home in Belmont Shores on the roof with his 25-35 Winchester Rifle, waiting for the Japanese to invade. After the U.S. entered World War II, he dropped out of high school and joined the service in September of 1942.

American Paratroopers were the answer to the German airborne units that parachuted into Norway and Belgium early in the war. The U.S. military needed volunteers for the risky endeavor, which paid an extra 50 dollars a month of hazardous duty pay. The extra pay drew volunteers like William to Camp Toccoa for initial paratrooper training. He had enlisted in the Army as an Infantryman with the understanding that after basic training he would become a paratrooper. He left Long Beach and reported to Fort MacArthur where he was issued his uniforms, given a haircut and shots, and then put on a train bound for Georgia. He arrived at Camp Toccoa, the United States Army Paratrooper training camp. William recalled that it was “damn tough training.” Soldiers were disciplined with 100-plus mile long marches with full gear and daily runs up and down Mount Currahee. Along with his fellow trainees, he spent several weeks learning parachuting procedures on the ground, then moved up to controlled jumps from 35-foot towers, and finished with “jump week” that featured actual drops from 1,000 plus feet. Only a third of the recruits were able to pass all three phases. The men with enough grit to complete all phases of training were issued the basic Silver Parachutist badge. William felt like a million dollars when they pinned his “jump wings” upon his chest.

The young paratrooper mustered with his fellow soldiers at Camp Shanks, New York. Located on the Hudson River, it was the largest troop embarkation site during World War II. They departed Shanks, known as “Last Stop U.S.” aboard the RMS Samaria, a luxury liner that had been refitted to be a troop transport by the British Royal Navy. They went through several submarine scares on the trip, but they arrived safely in England in September of 1943 and proceeded to RAF Ramsbury to join the 101st Airborne.

Part of the Mission Albany night drop, the 506th Parachute Infantry Regiment flew out of Exeter bound for Normandy on the morning of June 6th, 1944. After passing the Isle of Wight, they flew blind through the fog that broke up the formation of planes and gliders. Three of the planes in his formation were shot down, and they lost nearly the whole 1st Battalion. Above Normandy, William jumped and landed very close to his intended destination, just south of Carentan. The 506th’s objective was to capture and hold the bridges on the Douve River. He was in combat for one month in Normandy and recalls a fierce firefight against the Wehrmacht just west of Carentan. With only 7 riflemen and 2 machine gunners left in his squad, they were ordered to attack the advancing Germans in an area known as “Bloody Gulley,” which referred to the wagon trails between the fields where the Americans fought. On June 28, his regiment was relieved from the front lines and returned to England with only 31 officers and enlisted men out of the original company of 126 men.

William made the daylight jump on September 17, 1944 into Holland as part of the 101st and 82nd Airborne operation named Market Garden. They had the following mission objectives: land near Son, secure bridges at Veghel, at Sint-Oedenrode, and at Son, and capture Eindhoven. As the 506th moved towards Son, the young trooper watched as his company commander was shot through the neck by a sniper. William fired his M-1 at a bell tower where he thought the sniper was positioned. Thinking he killed the sniper, he attempted to enter the church but came under machine-gun and artillery fire. He moved doorway to doorway for cover, but an 88 mm shell found its mark, and William took shrapnel to his leg and shoulder. Fortunately, a medic pulled him into a house and treated his wounds. He was taken to Brussels in a British ambulance and put on a C-47 bound for England. In England, they operated on his shoulder and removed all the shrapnel they could.

He returned to the States on board a hospital ship. After arriving in Charleston, South Carolina, he was transported back to Modesto before Christmas 1944 where he was visited by his mom and dad. He had met his wife in England while at a dance in Edinburgh. Back home, William waited patiently for her to arrive in Southern California. She arrived on Christmas Day, 1948, and they were married 3 days later at a local Catholic church. The loving couple of 68 years had 10 kids: 3 girls and 7 boys.

William experienced firsthand the horrors of war both at Normandy and in Holland. It’s understandable that he gave the following advice to future generations, “Anybody who wishes they were in war doesn’t know what they are wishing for.” For being wounded in combat and his heroic service at Normandy and Holland, William P. Galbraith was awarded the Purple Heart, the European Campaign Medal, and the WWII Victory Medal. His most cherished award is the Parachutist Badge with two stars for combat drops.