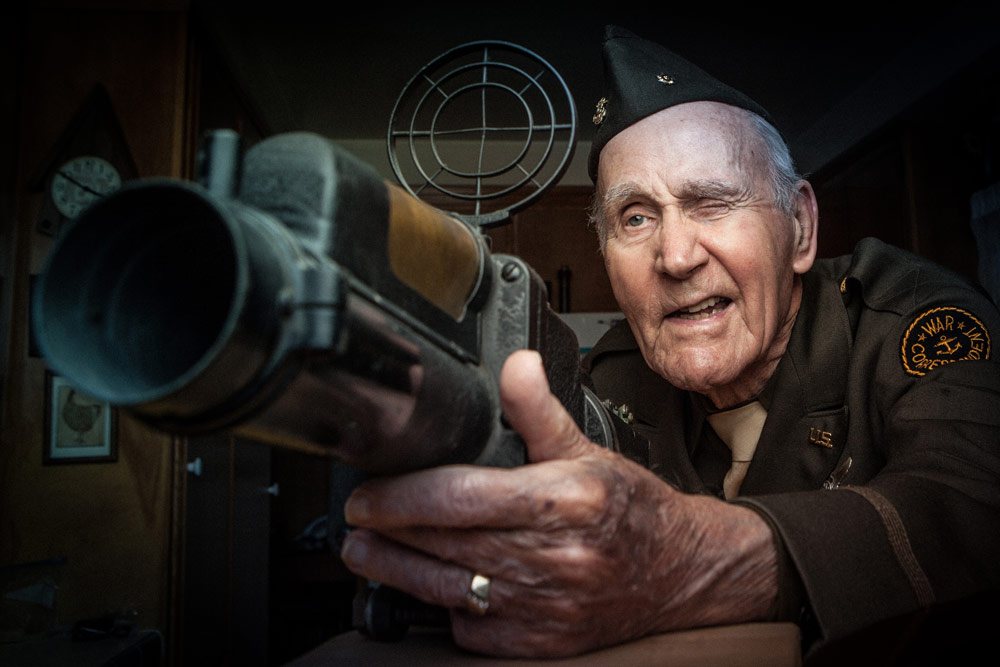 In 1937, twenty-year-old Stanley Troutman was employed at Acme News Agency where he mixed chemicals and performed mundane tasks. Six years later, he had risen in the ranks as a photographer and was given an opportunity that would change his life. It was 1943 when Stanley’s boss at Acme approached him about an opening for a war correspondent. “I really wasn’t that red hot about going because I had a wife and daughter. Well, my patriotism got the best of me and so I made the decision to go ahead.”

Stanley left his family and safe stateside job, voluntarily putting himself in harm’s way, with no military training and armed only with a 4×5 speed graphic camera. He was put on board the aircraft carrier ​Intrepid​ and shipped to the Pacific where he was to document the American fight against the Japanese Empire.

His first assignment was the invasion of Saipan. Dressed in Marine fatigues, sleeping in foxholes, and eating C-rations, Stanley endured the same hardships as most combat infantrymen would, with no gun to defend himself. The only thing Stanley was shooting was his camera. “If you were caught with a weapon, they could shoot you as a spy, but as a correspondent without a weapon you would be treated as a war prisoner.”

Stanley found himself in the middle of the action on a hill in Saipan. He threw himself flat on the ground as Japanese machine gun fire suddenly whizzed through the air. Stanley tried to shield himself from the bullets behind his speed graphic camera. “All I can remember is seeing a bullet hit the soldier to my right.”

Stanley stayed on Saipan for nearly a month before being sent to other Pacific islands, including Tinian, Guam, Peleliu, Leyte, Borneo, Manila, and Corregidor. When American troops invaded Corregidor, he made the mistake of going in too early.

“I was with the ninth wave going in. I thought everything seemed pretty secure.” A Japanese sniper aimed at Stanley’s landing craft on which eighteen men were aboard. Bullets flew around them, taking the lives of three men and wounding others.

Once on Corregidor, Stanley took photographs of General MacArthur who wanted to inspect the Malinta Tunnel which served as a bomb-proof storage and personnel bunker before becoming a hospital for wounded troops later on.

“He started down into the Malinta Tunnel by himself. I was the only photographer, questioning myself, do I go in or let him go?” Stanley was hesitant, wondering if Japanese snipers would start shooting at any moment, but he went in anyway. Thankfully, they emerged safely, and Stanley got his photographs.

Stanley sent his photographs to the War Picture Pool in Pearl Harbor where they were processed, proofed, and then sent to Acme. Acme sent copies of everything he took to the Associated Press, Life Magazine, and the International News Service.

In 1945, ​Stanley became a correspondent for the Air Force, giving them publicity as they began to separate themselves from the Army Air Corps. The Air Force gave the correspondents a literal trip around the world in an effort to show what the Air Force had done to help win the war.

Stanley was one of the first American journalists to document the destruction of Hiroshima and Nagasaki after the atomic bombs had been dropped. Along with one other photographer and ten correspondents, they landed in Hiroshima a month to the day after the explosion. From the airplane as they prepared to land Stanley could see the amount of damage, describing the effects of the bomb as “a pebble dropping into a lake.”

The waves of the bomb spread far and wide, wiping out some areas while jumping over others. “It was hard for me to realize one bomb could do so much damage.” Stanley photographed Japanese civilians with burns on their bodies along with rubble and desolation the bomb left in its wake.

When Stanley returned home, he became a bureau manager for Acme in Los Angeles before working forty-two years at UCLA in cinematography. In 1956, he was given the opportunity to help film the Olympics in Australia. Stanley looks back on his full life with thankfulness. “I’ve had a fabulous life.”